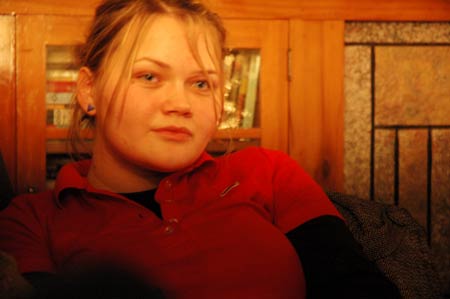 In the past few years I have been interviewed by the New York Times, The Washington Post (twice), People magazine for a story that never ran, and some magazine for babies because I seem to speak their language. They always want to talk to me about losing my job because of my website, and The Washington Post even flew out a person from New York to take my picture. When she showed up to my house she spent over an hour trying to figure out where to take my picture because after reading my website she said that my house DID NOT match my online persona. She said she expected to show up to some open, modern loft with metal furniture, but instead she pulled up to a house on a tree-lined street with a rocking chair on the porch and a living room full of fake, silk flowers. YES, I HAVE FAKE FLOWERS IN MY HOUSE. My excuse is that they sure didn’t come cheap!

Thank God she didn’t show up to my house this month because she would have seen two mismatched rocking chairs on the porch next to several bags of snow melter, about seven rotting pumpkins, and a dead potted plant that should be thrown away but that would require I put my shoes on during the day and I can’t be bothered.

In that particular Washington Post article I was mentioned I think in all of one paragraph, even though the person who interviewed me talked to me for almost three hours. And the picture they chose… the picture, my God. Both Leta and I look like convicted felons and CHUCK’S BODY IS CUT IN HALF. It looks like I have half a dog. Who art directed THAT fiasco? If anyone deserves to have his face in the papers it’s The Former Congressman Henry Buck Chucklesworth, and THEY CUT OFF HIS HEAD. He’s still bitter.

Of all the interviews I’ve done, however, my interview with Nikki and Ryan was by far the most fun, and not just because we all got drunk. No, it was fun because they were in my living room from 6:30 PM until 11 PM (I ACTUALLY STAYED UP THAT LATE, it was hard, but like I said, fun), and they are both former Mormons as well. What’s more fun than four former Mormons in one room drinking tequila and rum and making fun of Saturday’s Warrior? I’ll give you two guesses.

THERE IS NOTHING MORE FUN THAN THAT.

I was a little nervous at first because they showed up a bit early and we hadn’t yet put Leta to bed, and putting Leta to bed it a little bit of an idiotic ritual involving tub time and squealing and giggling and SPLASHING SPLASHING water that those without children might think insane. But Nikki immediately asked to hold Leta, and I was charmed instantly. Leta of course grabbed her watch immediately, and Nikki was nervous about letting her put it into her mouth because it might be dirty, and I explained that Leta lives with Chuck. And Chuck lives with his ass. Therefore, the two classes of logic I took ten years ago tell us that Leta gets licked by Chuck’s ass on a regular basis. Who cares if the watch is dirty?

They brought pizza and I asked them what I could fix them to drink and they both said, “Water,” and my stomach sank to the floor. For a moment I thought, have I invited two Mormons over to my house who are going to call the police when they leave because I’m going to drink in the same house as my innocent baby girl? YOU NEVER KNOW. This IS Utah after all, and up until recently a dog and a cat were forbidden by law to live in the same house. Plus there’s that whole law that makes it illegal for a man to stick his penis in another man’s ass. And I’ve been breaking THAT law for years now.

After we put Leta to bed we opened up the box of pizza and Jon and I asked them what we owed them for the purchase. These are college kids after all, and I don’t know about you, but when I was in college I was so poor I qualified for food stamps. And that’s when they said, “Well, you could pay us back in booze.” And I was all, PHEW. I narrowly escaped the law AGAIN!

Tequini’s were poured for Jon, Ryan, and myself, and I had a bit of rum on hand for Nikki. The ingredients of a Tequini sparked a conversation about the process involved in making vodka — don’t ask me how it got from tequila to vodka because that would be one of the many things I don’t remember — and Jon broke out his ninja intelligence and explained the whole thing. He even used the words “covalent bonds,” after which I told him to stop or I would have to take him to the bedroom RIGHT THEN.

I held back on tequila consumption, meaning I had only a few quarts, until after the interview was concluded because they were going to record the interview and the LAST thing I want is for there to be some permanent record of my drunk voice that I don’t have in my possession. When I’m drunk my Southern accent suddenly reappears, except it doesn’t just sound Southern, it sounds Ignorant Truck Without Wheels In the Front Yard On Cinder Blocks Southern.

The interview was the best interview yet because they didn’t even ask me about losing my job because of my website. THANK YOU. Their questions were more like, “What do you do for fun in Salt Lake City that doesn’t cost a lot of money?” And I suggested that we all get mohawks and run naked through Temple Square, because that’s not only cheap, THAT’S FREE. And Nikki and Ryan were all, Let’s totally do it! And that’s what I love about college kids: they haven’t yet been spoiled by years of working in corporate America to know that sitting in front of the television watching “America’s Next Top Model,” while eating Frito’s is the most fun thing you could do in ANY city for cheap. College kids still have ADVENTURE in their blood. That, and they weren’t embarrassed at all to hold a thirty minute conversation on the cultural significance of a “Real World” cast member. We should all be so… so ALIVE.

Nikki brought a Polaroid camera to take pictures, so I ran and got our camera, what my father this morning referred to as The Terminator of All Cameras, and we spent a good hour taking pictures of each other taking pictures. Do you have any idea how awesome such an activity is when you’ve had two Tequini’s? YOU SHOULD TOTALLY TRY IT. You really should, and then you should just stick to that instead of revealing to everyone in the room that you once tried out for a reality dating show, and that you could never run for office because of what you said on the audition tape, something outrageous and totally untrue, like say, you’ve had sex with four women at once and wouldn’t be opposed to riding down Sunset Blvd. hanging out the top of a limo with your top off, because OF COURSE they’ll cast you if you say shit like that. Just don’t mention that part.

As I was saying goodbye to Nikki I told her how much fun we had with them, that no, like really, we had so much fun, because do you know how much it costs to see a movie when you have kids? You have to pay for the babysitter on top of the ticket prices and then the popcorn and the drink and you might as well just have college kids over who are fun and will drink booze with you, who promise they won’t tell anyone about that part involving the sex with four women.