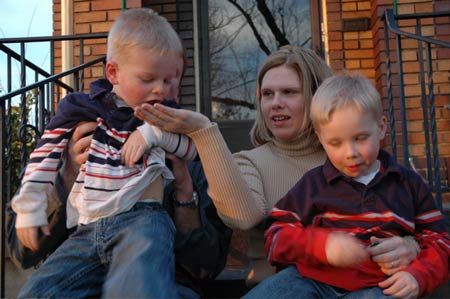 Yesterday Beth called and asked if I had time to stop by after one of Leta’s naps to take their family Christmas picture. No problem, I thought LIKE AN IDIOT, I’d just hop on by after Leta’s second nap, take their picture LIKE AN IDIOT, and then run all the other errands I needed to get done.

I AM AN IDIOT.

Leta was in remarkably good spirits, so this story has nothing to do with her screaming and me looking around at everybody else going, “She was born this way,” LIKE AN IDIOT, and then just sort of hoping that the screaming would stop on its own, but it never does, because she’s learned that I will give in and shove my keys into her mouth to save the sanity of the world around us. Surprisingly I AM AN IDIOT and Leta has nothing to do with it. At least not this time.

In fact, while we were sitting at Beth’s house waiting for Beth’s husband, Dave, to get home — why he wasn’t already there in the first place, I’ll just leave that part of the story out of this, but I will say that when he finally did show up, SEVERAL minutes late, and when I say several I mean like way more than just a few which would have been perfectly acceptable but still a little annoying, and when he walked through the door Beth gave him a look that should have melted the skin off of his body and I just said what she was thinking and I blurted out, “You turd.” — Beth got out her camera, and when Leta saw it she looked up at it and smiled. On cue. Like a little trained gerbil.

That’s the way photos go in this house: Leta smiles, I immediately look constipated, and Jon always looks like he has just taken a huge hit off a cigar and is holding the smoke in his mouth for as long as he can until it burns a whole in his esophagus. For every blurry photo I take of Leta there are always at least two or three good shots, and maybe that’s just because she’s given in and knows that the camera IS NOT GOING AWAY ANYTIME SOON. It could also mean that she’s going to grow up and become a camera whore like Paris Hilton, and if that happens, she’s got a RUDE awakening barreling her way: WE DON’T OWN HOTELS. THERE IS NO INHERITANCE.

I had no idea that getting two adults and their two children to pose for a decent shot would be so difficult. I also had no idea that I would give birth to a baby girl who would scream more than most tortured animals at a cosmetics plant, and that’s the whole thing about parenthood: it’s nothing like I thought it would be. I am constantly surprised at how different my child is than what I thought she would be, and therefore I am SO MUCH MORE understanding of people with children in public. So when Beth mentioned that she was going to bribe her boys to sit still for the picture, I thought, WHATEVER WORKS! The old Heather would have said, “Ok,” with skepticism dripping from her voice and would have thought silently LIKE A TOTAL FUCKING IDIOT, “I will NEVER have to bribe my children.”

THE UNIVERSE IS WICKED AND HAS A REALLY GOOD SENSE OF HUMOR, PEOPLE. YOUR CHILDREN WILL BE BEASTS.

The light was fading fast, so we all scurried to the porch and everyone got into their respective positions. Kyle, the five-year-old, sat in Beth’s lap (he is her exact replica), and Eli, the three-year-old, sat in Dave’s lap (he is Dave’s exact replica, except he is much cleaner when he eats his food). I stood a few feet away, and since we both own the same camera I started taking photos immediately. The boys remained still for all of TWO WHOLE SECONDS, and then the wiggling started, violent wiggling and looking at places other than the camera.

In the span of TWO WHOLE SECONDS I managed to take a fairly large amount of photos, because you can do that with a Nikon D70, take tons of shots in just a few seconds. But when I looked down to see how many I had taken, the number on the camera read something like 245 which means that there was room enough left on the memory card for 245 more pictures. 245? Two hundred forty-five? Was there a computer attached to the camera that I did not see? An invisible, portable computer? WHO HAS A MEMORY CARD THAT BIG? THAT’S A HARD DRIVE, NOT A MEMORY CARD, AND PLEASE PLEASE PLEASE DO NOT TELL MY HUSBAND THAT SUCH A MEMORY CARD EXISTS. I WANT TO BE ABLE TO EAT FOR THE NEXT MONTH, AND IF HE FINDS OUT ABOUT THIS MEMORY CARD WE’LL HAVE TO RATION LIKE WE DID THAT TIME THEY CAME OUT WITH iMACS THAT LOOKED LIKE LAMPS.

So I kept taking pictures, and those boys kept wiggling. And LIKE AN IDIOT, I just kept taking photos without giving any direction, figuring that they would at some point just sit still. Beth tried various tactics to get them to look at me, BUT I’M AN IDIOT, and her tactics kept backfiring because I TOOK HER SERIOUSLY. “Look!” She would say to her boys, “Heather has a spider in her hair!” And I was all, “WHAT THE FUCK! A SPIDER? WHERE? WHERE?” And I jumped up and shivered and made high-pitched wheezing noises. Which made the boys even more wiggly because, look! There’s an un-showered woman doing a spider dance.

Beth told them I had a ladybug on my face, and I believed it. She told them I was really a boy and not a girl, and I ACTUALLY HAD TO THINK ABOUT THAT ONE. Between shots she would give them an M & M as bribery, but they got it stuck in their teeth or smeared it on their faces. I tried holding the M & M bag over my head, but that kept causing me to lose my balance and take an even more blurry photo. The light also changed directions at least four times through the whole shoot. God was not on our side. AND I’M AN IDIOT. That’s a bad combination.

When they send out this photo to friends and family this season they should add a P.S. on the card that says, “Our friend, The Idiot, took this photo, and we can hear her daughter scream from a block away.”

Beth’s kind account of the debacle can be seen here.