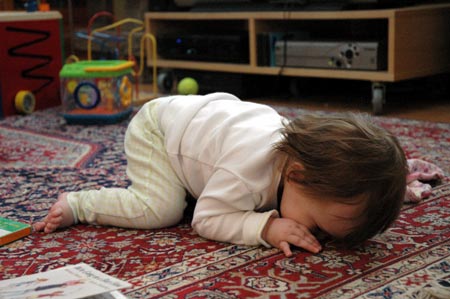 Tomorrow you turn thirteen-months-old which means that now when people ask me how old you are I’m going to say, “She’s a year and one-twelfth.” I know how important those extra months are to you kids. The other day I asked a little boy how old he was and he said, “Four and almost a half.” And then I told him, “Wow, I’m four and 50 halves, what a coincidence!”

The majority of the past month has been spent watching you develop your crawling style, and I have to admit that I was a little afraid early on. Your interpretation of the crawl was an abomination of the human form, an almost painful display of two sets of uncoordinated DNA colliding. But you caught on pretty quickly and now you crawl exactly like they say you’re supposed to crawl, alternating hands and knees in a forward direction. This means that you should be able to read by the time you’re 16. Make us proud.

There hasn’t been a single day in the last month that has conformed to any sort of identifiable schedule because you refuse to sleep when you’re supposed to sleep. Some days you take two naps, some days you take one nap, and then some days you take no nap at all and it’s on those days that I call your father and tell him that by the time he gets off work you will be at the neighbor’s house and I will be at least 100 miles on my way to Montana where I will start a new life as a hostess at Applebee’s. I thought he didn’t believe me but a couple weeks ago I went to get my hair cut and on the way out the door your father said, “You’ll call me when you get to Montana, right?”

This month you have also figured out how to open things, things that aren’t supposed to be opened, things with LOCKS HOLDING THEM SHUT. You know the unlock code on the babysitter’s cell phone and once called her Peruvian boyfriend, Chimmy. Chimmy Chimmy Cocoa Puffs has taken hold of your heart somehow because you will say things for that boy that you won’t say for anyone else, things like, “Uh, oh,” and “Wow wow wow,” and “Taco.” Here’s the thing, kid: if you fall in love with some boy from another country and he takes you away to that other country where I won’t ever get to see you or my grandchildren then you can just consider yourself grounded until you’re 80, or at least until you fall in love with someone nearby who has a lot of money.

You can open locked drawers, cosmetic cases, every type of cell phone, and even sealed CD cases. That’s the first thing you do when you encounter a new object, determine how the hell the thing opens, and even if it’s not an object that opens YOU FIGURE IT OUT. Your little long fingers love to turn pages and pull at tags and pluck stray hairs on your father’s neck. You know how to take Grandmommie’s earrings out of her ears without drawing blood. Speaking of Grandmommie, last week you imitated her saying GRANDMOMMIE, except it came out sounding like GAM MEE, but that was close enough because she instantly willed you The Avon Fortune. If I had known it was going to be that easy I would have had kids WAY sooner.

The other thing I have to mention is your love of humping the floor. You’ll crawl about 10 feet across the room and then sort of collapse from the exhaustion, only you don’t just lie there, you hump your butt up and down. And giggle. You do this when we give you hugs as well, hump your little rump, and circle your arms around our neck. Sometimes your father will pat your back while he’s hugging you and you will in turn pat his shoulder. One night you were patting his shoulder and saying, “Oglee oglee oglee,” over and over again and your father looked at me and said, “Doesn’t this just make your heart sing?”

Yes, yes it does, like the thumping buzz of a sub woofer. Already I am starting to notice that you are becoming an independent creature choosing certain directions to crawl and certain toys to play with. You no longer cry when the babysitter shows up or when we leave you for a few hours with Grandmommie. In fact, you know you’re about to have a good time and I can almost see the mischievousness in your eyes. And while this thrills me, makes my heart sing bass lines and soar with pride that you are your own soul, I can’t help but start to think, my God, slow down. Don’t go so fast. Stay.