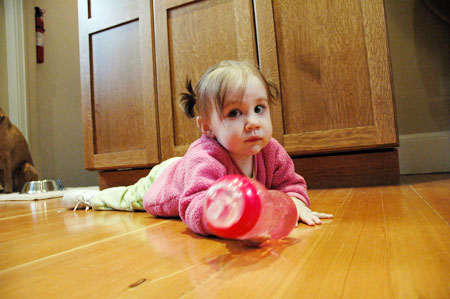 Tomorrow you turn 15-months-old. Tragically, you already have the attitude of a 15-year-old and I think I’m in way over my head here. You may turn out to be the first kid ever grounded before she has all her teeth. Or the ability to walk.

Other mothers assure me that it’s normal for children your age to show signs of temper tantrums but you’ve moved way beyond the point of showing signs and into BLINKING NEON BILLBOARD mode. It all started when you had a sleep-over with Grandmommie a couple weeks ago. When she brought you home the next afternoon you freaked out when you realized that the Bejeweled Wonder was actually returning you to us and YOU DID NOT WANT TO BE RETURNED. Turns out that she did nothing but feed you the entire time you were in her care, ice cream and cookies and all sorts of contraband. You threw a three-hour tantrum afterward, no doubt brought on by bloating and diamond earring withdrawal.

You’ve got two or three or fifteen teeth coming in all at the same time, and the only things that seem to soothe your pain are cold pickles and MAKING MY LIFE A SLOW DESCENT INTO HELL. In addition to hourly tantrums which are marked by beating your fists into your knees you refuse to take naps and you’ve taken to throwing yourself prone onto the floor. I’m not so sure there’s a successful way to discipline someone your age, someone who no longer sits still for “BoohBah” (how the HELL is your father supposed to rock my brick house if you’re in the living room sticking your head into the DVD tray) yet still thinks that NO means Go ahead, open the diaper bag, pull out my wallet and chew a hole in my debit card.

My strategy has been to refocus your energy into something more positive than banging your head into the coffee table. Once I see a tantrum coming on I try to change the environment and distract you. This means that by 9 AM we’ve played with every toy in every room and you’ve thrown at least half of them at the wall. Then I’ll try taking you outside which is never a good idea because of all the grass to eat and concrete on which to bang a part of your body. Sometimes books work, but I never read them fast enough and THAT makes you mad. SORRY I DIDN’T GROW UP WITH A BOOKMOBILE LIKE YOUR FATHER.

Your speed reader father took this photo of you during one of your playdates with the front door:

Your favorite thing to do now is play with boxes, opening and closing every flap, and doors, pushing them closed and then opening them. Sometimes we’ll open the front door so that the dog can look out the screen door and you’ll close the door on him, his body cut in half. Remarkably he doesn’t mind this at all, barely even notices it really because at least you’re not sticking your fingers up his nose or sitting RIGHT NEXT TO HIM as he eats his dinner, both of you on all fours staring mesmerized into the bowl. Last night your father and I caught Chuck sneaking into your room to sleep. We were simultaneously horrified and touched, scared he would wake you but thankful that he loves you enough that he wants to be near you. He doesn’t even want to be near me when he sleeps at night, but that might have something to do with that one time he wouldn’t stop licking his empty ball pockets and I opened the window to throw him out of it.

About a week ago you started putting weight onto your legs. I honestly never thought I would see you in such a position, standing there holding onto something without someone propping you up. For many months I have been living with the feeling that someone has been gripping my lungs, and last week I took a huge, relaxing breath. I am so proud of you. I am so excited to see you pull yourself up and explore things from a newer, higher perspective. I think this is one of the many times when I will be learning from you, this lesson being that I need to stop worrying about what comes next and simply enjoy what you’re giving me now. So what if you can’t walk yet, you can put a diaper on your head and laugh about it. So what if you get angry and want to bore holes into my forehead, I can show you a pen you have never seen and you think I’m some sort of magician, your anger instantly turning into wonder and AT SUCH AN AMAZING CREATION, A PEN. Before I know it you’re going to be at an age where you’ll be embarrassed to even be associated with me, but right now you can wipe your nose on my shirt and rub your head in it. This is what you’re giving me now, the chance to be a mother to a baby, tantrums and snot and all.