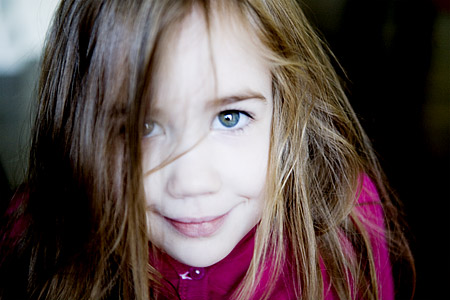 Last week you turned fifty-six months old. Have I ever told you about some of the email I get from people who are angry at me because I’m counting your age in months? People who point out that no one else counts ages in months, why am I going around screwing with people’s heads? You would think that someone who has read my website for more than oh, two minutes? three? would have figured out that I am so depraved that I’m pretty much capable of anything. First I’m counting ages in months, and next thing you know I’m raping kittens because of the endorphin rush. YOU JUST NEVER KNOW.

So, Leta, YOU’RE FIFTY-SIX MONTHS OLD. And I’m not even going to help you do the math on that.

This month we’ve seen a huge change in your physical development, and once where you were tentative about jumping or climbing you’re now aggressively curious. Last week you climbed the rock wall on the swing set in the back yard for the first time, just hopped right onto it, seized one of the grips and starting pulling yourself up. Both your father and I looked at each other like, when did you teach her how to do that? And then immediately realized this was something you thought up by yourself. Which is a whole new development in another area as well: risking death for the thrill of it. Next you’re going to figure out how to drive your tricycle down steep driveways. Then you’re going to steal your father’s pipe lighter and try to set your farts on fire. This will continue throughout your life until one day you’re at a Fourth of July party, and two glasses of wine into dinner you decide that life wouldn’t be complete without trying to do a back flip on the trampoline. Some people call this stupidity, Leta. But not me. I just call it Learning The Hard Way.

Your hand-eye coordination has also seen some improvement, at least enough that your father will now let you play Super Mario Galaxy with him. For a while you were very bad at collecting the Star Bits, and he would say mean things to you and make you cry. Granted, any time we tell you something that you don’t want to hear you tell us we’re being mean. Leta, it’s time to go to bed. YOU’RE SO MEEAAAAN! Leta, pick up that mess. SO MEAN! I CAN’T BELIEVE HOW MEAN YOU ARE! Leta, you overcooked my hot dog. YOU DON’T LOVE MEEEEEEE!

Last week I had to give a lecture to a group of local business women, and I left your father in charge of putting you to bed. That’s nothing out of the ordinary as he and I take turns putting you to bed or taking the dogs for a walk, but when I got home an hour and a half after your bedtime your father was standing at the door nearly out of breath. I asked him what was wrong, and he goes, oh this? Yeah, I just put her to bed five minutes ago. EXCUSE ME FIVE MINUTES AGO? And then he explains that you guys had lost track of time playing Super Mario Galaxy, and he acknowledges that he used to say hurtful things, but something happened! You are really good at it now, and with you on his team he’s able to advance farther than he ever has! You could see the possibilities going off like bombs behind his eyes, a geek having given life to a fellow geek, and he asked, “Is it too early to introduce her to Dungeons and Dragons?”

I can’t decide which would be worse: a teenager who plays with fictional elves or one who knows the names of every Dallas Cowboy cheerleader.

Recently we stopped giving you any treats whatsoever, not to punish you necessarily, but because I was tired of all the ridiculous negotiating over the number of bites of a meal you had to eat before dessert. So I took away dessert. Done. And it’s been a lot easier than I thought it would be, except you’re now a lot hungrier for normal food and are always wandering around going, “I want something in my mouth.” It’s not, “I’m hungry,” or “I would like something to eat,” it’s “PUT SOMETHING IN MY MOUTH.” It’s funny only because this is not a phrase that any adult would say out loud in mixed company. In fact, I think there are rules that say the presence of this phrase in the dialogue of a movie automatically qualifies it for an X rating. But that’s how you communicate to us your need for food, and yesterday you walked up to me with a wad of gum in your mouth and said it — “I WANT SOMETHING IN MY MOUTH” — and when I pointed out that you already had something in your mouth you spit the gum into your hand, opened up your empty maw to show me your tonsils and said, “I WANT SOMETHING IN MY MOUTH NOW.” It was such an exasperated gesture, too, as if you were saying ARE YOU REALLY THAT DUMB?

A few weeks ago I started a new routine with you when I put you to bed. After we read books I now talk to you about your day instead of telling princess stories, and at first you were really reluctant to this idea because it didn’t seem reasonable. Hadn’t I seen what you’d done during the day? Why do we now have to talk about it? OMG WTF? But you soon warmed to the idea, and now we talk at length about every little detail of your life: what you had for breakfast, the outfit you wore, what games you played at school, which friend has a new Dora bike, the game of hide and seek we played before dinner. At this point in the routine I’ve turned off the light and I’m lying next to you as you recount your day, and most of the time you’re accidentally hitting me in the face as you swing your arms wide to show JUST. HOW. MUCH. you loved that game of hide and seek. I guess you could say I started this routine with the hope that we could continue to talk this way throughout your life, or that it at least wouldn’t be foreign to you to share such details with me later on. Maybe this is my way of letting you know as early as I can that this is the type of relationship I want to cultivate with you, and that I will always be interested in the highs and lows, the exciting and the mundane, all of it. You will always be one of the most interesting people in the world to me.

Even when you’re in a mood like the one you were in last night, when you finished telling me about the silly faces you’d made at Dad over dinner and then said, “I’m tired, can you please leave?” ESPECIALLY THEN.