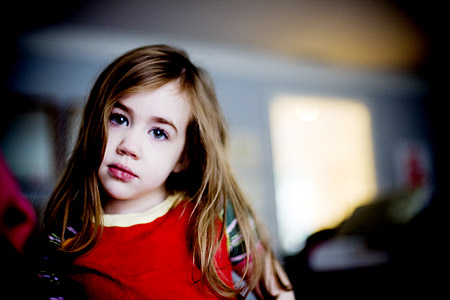 This week you turn fifty-seven months old. This week we also had to turn the clocks back an hour, a ritual that happens every fall, and you are still upset that Those In Charge of Time did not ask your permission. That one little hour destroys your schedule which in turn destroys your stability, and already this week I have been tempted to break open one of my Prozac capsules and sprinkle it into your Cheerios. You’re not going to sleep on time, and then you’re waking up in the middle of the night completely disoriented claiming that the sun has died and we’ll never see it again. When we explain that it hasn’t died, it’s just warming the other side of the earth right now, you want us to call it on the phone and ask it to hurry up. I don’t have that kind of power, so to get you to fall back asleep I tell you that I’ve put in a request to Oprah.

Last week for Halloween you dressed up as your favorite princess, Sleeping Beauty, and went trick-or-treating with all ten of your cousins on my side of the family. You had been undecided for quite some time concerning your costume, and every day it changed from Sleeping Beauty to Jasmine and then back to Sleeping Beauty, but you were always certain that you wanted Daddy to dress up as your prince, and me? You wanted me to dress up as a witch. I’m thinking this is because I’m the one who always says no, the one who never lets you have a treat after dinner, the one who says you cannot go to school without any pants on. And you know what? I’m fine with that. My feelings aren’t hurt, and in fact I may just start cackling and carrying around a broom to firm up my role. I mean, have you ever seen a Disney princess movie? The witch always has an impressive arsenal of powers, and the prince, well… the prince is a total pussy.

This year since you were much more familiar with the concept of Halloween you were less impressed that strangers were passing out candy and much more interested in when we could go home and eat it. Like, maybe after the first house. The second that first person dropped two miniature candy bars into your bag you whipped around and asked if we could head back and eat them now. Not yet, we said, how about we gather more treats, and this made sense to you, at least up until the second house when again you asked if we could be done. Somehow you lasted a good half hour, and when we finally called it a night and headed home I could tell that you were totally sweating it. Was I going to let you eat your treats? You didn’t know, and you couldn’t look me in the eye, so you asked your prince who in turn told you to ask the witch. HA HA! BEHOLD THE CHAIN OF COMMAND! THE POWER! MORE INTOXICATING THAN SCHNAPPS!

I hesitated when you asked me, because I am mean and evil and enjoy the sound of your head exploding, and then said yes. Of course. It’s Halloween. And Leta, I don’t think you have ever loved me more than you did in that moment. In fact, you took the time to hug me and tell me that I am wonderful before ripping into a full-sized Hershey’s bar. It is not lost on me that you showed such affection because of a goddamn chocolate bar and not because I carried you in my womb for nine months or because I pushed your seven-pound body out my wee waw. For a chocolate bar that did not whip out its boob while standing in line at the post office because you needed to be fed. A chocolate bar that has not cupped its hands underneath your mouth as you throw up a cheese quesadilla. That being said, there is a reason you give boxes of chocolate to your loved ones on Valentine’s Day and not, say, a picture of vaginal stitches next to a thought bubble that says, “I love you THIS much!”

Finally, I wanted to talk to you about what happened last night, how your father and I and millions of other people across the country helped elect the first African American president. Leta, you are so lucky to have been born in an era where this is possible, in a time where generations have come together to stop the sick cycle of bigotry that has been passed down from fathers to sons, mothers to daughters, where we have finally stood up and said, enough, we are more civilized than all of that. I have never been more proud to be an American than I am today, and when you are old enough to understand the significance of this election, when years from now you ask me where I was when I found out that Barack Obama had won, I’ll tell you that while there were millions of people dancing in the streets and gathered at parties, thousands more across the world chanting in impromptu parades, I was sitting on the couch next to your father, our fingers intertwined, the two of us alone with the dogs asleep at our feet. The television was an eruption of noise and chaos, but we sat there quietly absorbing the moment, worried that if we blinked we’d wake up out of a dream.

There have been moments today when I haven’t believed it, have worried that I imagined everything. Having grown up in the South I didn’t ever think this could happen, not when I and so many of my peers had so much indoctrination to overcome, years of being intentionally and sometimes unintentionally taught by seemingly well-meaning superiors that the color of your skin makes you different. And yet, while this election is a firm rejection of that kind of thinking, it’s also about how this man brought so many people together and inspired us by his example to focus not on bickering or hurt feelings or the vast divide of our differences, but on rolling up our sleeves and looking for a way to bridge that chasm. And Leta, I finally feel like we may have the momentum to change and fix so much of what has gone wrong — from economics to the environment, to health care and humanitarian disasters — that instead of leaving your generation with a burden almost impossible to climb, there is hope that we may in fact leave you with a world that is better than the one you were born into. I know I am not alone when I say that my vote in this election was as much for his vision as it was for you and your future.