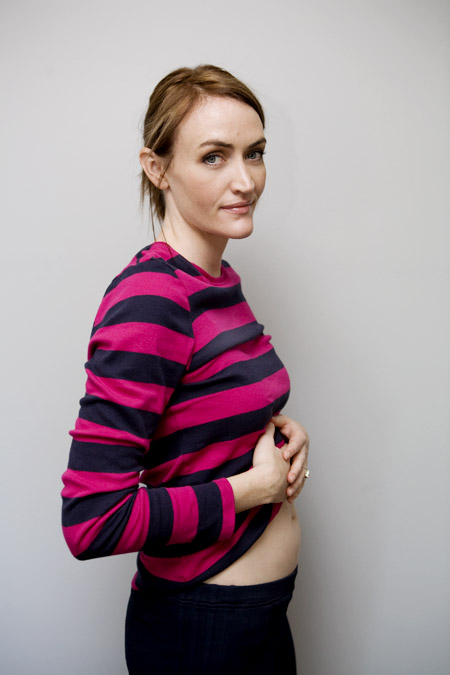 Before you get all skritchy and start yelling that this is not at a bump by any stretch of the imagination, let’s compare this to the bump at 15 weeks from my pregnancy with Leta: Could someone please tell the woman in that photo to put some sunscreen on?

Also, some of you have suggested that I might be pregnant with twins, and believe me when I tell you that I lived with the nightmare of that possibility for ten and a half weeks. And no, I’m not going to apologize for referring to it as a nightmare, I’m sure your twins are lovely people. But I am not the type of person who can handle that type of chaos and readily admit that you are a better person than I am. We had the doctor check for twins during my sonogram, and she promises me that there was only one swimming around in there. Look: I asked her if the sneaky twin could be hiding somewhere in a corner? Maybe it had dressed itself in an invisibility cloak? And she was all YOU’RE SO SILLY! And I was all, hmm, I don’t think “silly” is the clinical term for it, do yourself a favor and REFRAIN FROM GOOGLING MY NAME.

Now, on to a burning question that’s sort of sitting out there making a few people uncomfortable or at least a little more curious than they are used to being: I am still taking Prozac. Last year when I found out I was pregnant (the one that ended in miscarriage) we found the phone number for the doctor who treated me for postpartum depression in the hospital in 2004 and left a desperate message. He does not treat anyone outside of the hospital but was generous enough to return our call and answer our questions about medication during pregnancy, and his advice was to remain on Prozac (although he did suggest that I stop taking Neurontin and Valium). Prozac has a half-life so long that even if I had stopped taking it when I found out I was pregnant it would have remained in my system for several weeks. He’s been treating postpartum depression for over 30 years and has seen hundreds of pregnant women who have continued taking Prozac go on to have perfectly healthy babies. My OBGYN agrees with him.

I do not know about any other medications, and if you have questions or concerns about your own you should call your doctor. I do know that I feel good about this decision, and so far things are really good. Am I physically miserable? Absolutely, but I’m really hopeful and coping like I should be. And this time I know exactly what signs and symptoms to look for in my mood and what tools I can turn to. I feel so much more prepared, like I know I’m about to jump into a pond full of crocodiles, and this time instead of throwing in my naked body head first I’m climbing into an armored Humvee that will be slowly lowered into the water, machine guns first.

Will people accuse me of putting my baby in danger by continuing to take Prozac? I expect that email or comment to hit within minutes. This wouldn’t be the Internet without those lovely little cutie pies. Smooches! The reason I bring this up is because someone is out there right now trying to make the decision about whether or not to stay on her medication, and even if her doctor is telling her that she needs to, that it’s perfectly okay, she knows that if she does she’ll have to listen to some dickwad condemn her for trying to kill her baby. I want that woman to know that I am surrounded by those dickwads, they have my email address, my mailing address, their own websites where they go on and on about how sad it’s going to be for my children to grow up with such a crazy mother (Hi, guys! Thanks for the traffic!), that I shouldn’t be allowed to have another baby. IT’S ALL BEEN SAID ABOUT ME. All of it, the same things over and over again. I want you to know that all of those people are dealing with their own issues, it has absolutely nothing to do with you, and that I’m willing stand up for me and for you and say, hey, thanks for your concern, but I’m perfectly capable of making decisions for me and my baby.