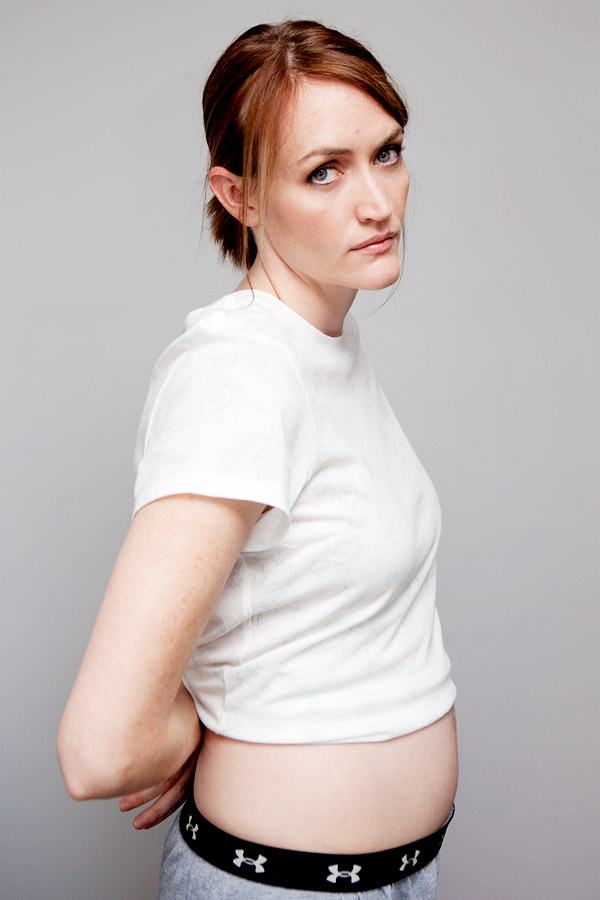 Today marks my 18th week of pregnancy, and the look on my face has a little to do with the way I’m feeling, although it’s more about the fact that Jon was trying to get me to smile. Nothing to me is more obnoxious, except maybe someone calling me sweetheart or darling with a Boston accent. That look is a warning, it’s me going dude, if you would like this kid to grow up and know its father you had better shut it. I will smile when I am damn good and ready, thank you very much, just take the photo before things turn ugly and I start using your middle name.

The past couple of weeks have physically been a breeze, but emotionally I’m a bit of a wreck. I think it has very little to do with pregnancy and everything to do with the weather. It’s a seasonal dip I struggle with every year at about this time when I crave warm weather, sun, and late afternoons on the porch but am living day after day of cloudy skies, snow, and 4:30 PM sunsets. This is probably the hardest thing about living in Utah, and I know there are far colder places than Salt Lake City, but when I stopped to pinpoint exactly what was making me so sad I realized it was just a matter of not seeing blue sky in fourteen days. And the constant act of bending over to towel off the dogs so they don’t drag snow into the house. Nothing tragic, no, but it was enough to make me start yelling obscenities at a carton of orange juice because I couldn’t get the safety cap off.

There’s not much I can really do to combat this other than get out in the sun on days when that is possible and continue my exercise routine. Yes, I’ve heard about those lamps people use to treat themselves for seasonal affective disorder, and while I do think I am sensitive to light, I’m willing to bet that my case has more to do with actual sun and warmth and the smell of fragrant, blooming plants in the air. Which is why we’ve planned a trip to Southern California for the last week of February. Which is why we should move to Southern California in February, except for all those other mitigating factors like “house” and “family” that routinely tell my winter mood to suck it.

In other news, I have an ultrasound scheduled for Friday morning, and our plan is to find out the sex of the baby. We have been referring to it as Stretch, although Leta thinks that’s horrifying. I asked her to suggest a name then, and what do you know, she’s now calling it Princess Aurora. I told her we couldn’t name the baby that if it’s a boy because, you know, middle school, and she said, not a problem! No worries! If it’s a boy we’ll just call him Prince Aurora.