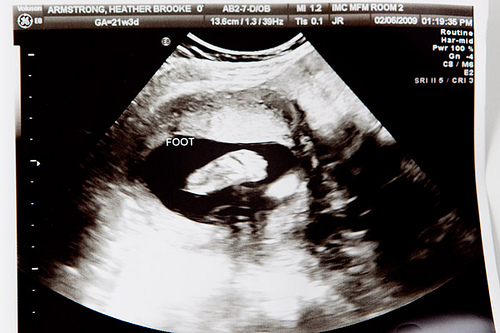 When we went in for an ultrasound a little over three weeks ago the doctor determined that I had a low-lying placenta, meaning it had formed at the lower half of the uterus. Excuse me while I slip into technical pregnancy talk for a moment: this can potentially be a problem if it doesn’t eventually move upward during the pregnancy because it can cover all or part of the cervix, a condition known as placenta previa that can cause bleeding or symptoms of early labor. She also couldn’t get the baby into a position that made it possible to inspect the end of her spine, so we scheduled another ultrasound to take a look at these concerns. That appointment was last Friday, and during that exam we got to meet the baby’s feet: She yawned four times while we were watching, a gesture that silenced both me and Jon. I’ve only recently been able to feel her kicking around in the womb, so in many ways the only physical manifestation of the pregnancy so far has been my increasingly immobile body. This baby moves much differently than Leta did, and where Leta’s movements within felt like she was knocking down walls, this baby feels much more like she’s tiptoeing through the room. Watching her stretch her mouth wide open crystallized the reality of all these symptoms— the swollen fingers and toes, the flesh-eating acne, the embarrassing, uncontrollable flatulence that I often try to pass off as a creaky wooden floorboard. There is a certain look I have perfected when out in public, and when Jon turns around suddenly because he cannot believe that my dignity would allow such a sound to happen, all I have to do is raise my right eyebrow. This is code for YOU DID NOT HEAR ANYTHING.

Friday it sort of hit us squarely in the face: holy shit, there’s a human in there.

The placenta had moved upward significantly, and all the baby’s parts looked well-formed and jutted into and out of all the right places. The doctor asked us if we had chosen a name yet, and my answer was probably a lot more detailed than she had planned for. Thing is, we had a name picked out for a boy. In fact, we’ve had a name picked out for a boy since the beginning of our relationship. A boy was always going to be named after Jon’s grandfather, Truman, and then we’d only have to negotiate the middle name. Something short, precise, something I could yell easily and derisively when I discovered he had peed on the toilet seat.

But we cannot agree on a girl’s name. And every time I suggest something lovely or something sweet he says, no way, absolutely not, he knew a girl in grade school with that name, and she used to eat her boogers.

Then how about this name? No, he once dated a this name, and not only was she a bad kisser, but she eventually became a polygamist.

What about this one? Hell no, he once worked with a this one, and her hair smelled like cat food.

This? Reminds him of moldy cheese.

That? Makes him want to shoot squirrels.

So no, doctor. We haven’t yet chosen a name.