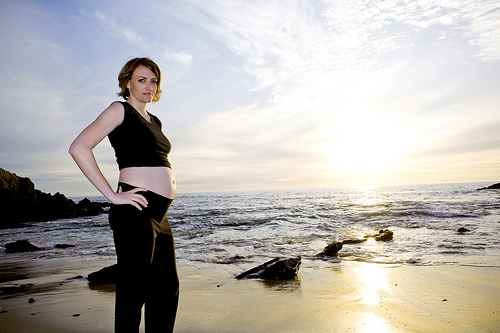 Yesterday marked the 24th week of my pregnancy, and since we’re on vacation near a scenic, coastal backdrop we thought, why not? I wasn’t anywhere near this big when I was this far along with Leta which makes me look at these photos and think, oh dear, and the voice in my head sounds exactly like Jon’s mother. Someone asked me yesterday if I’d had my lips plumped, and don’t I wish I could say yes, the roundness of my mouth has nothing at all to do with the 25 pounds I’ve gained since September. When in fact I think half the glass of orange juice I drank this morning is being retained in my left nostril.

Life at 24 weeks is pretty much what I expected it to be. My back is always killing me, shoes have stopped fitting, and when I’m standing at the foot of a staircase I have to plan my next move with the skill of a civil engineer. The biggest change is the color and clarity of my dreams, and while I’ve been having dreams about babies and labor this whole time, up until now they haven’t been so vividly real or haunting. Last week I had a dream that I dropped into a coma during labor, and when I came out of it two days later the first thing the doctor showed me was the baby’s birth certificate. It said: Maria Armstrong.

Was I concerned that I had been in a coma? Or that I had barely survived labor? No, I was ENRAGED that Jon had named the baby something WE HAD NOT AGREED ON. And in the dream I was tearing IVs and tubes out of my arms, throwing bed pans across the room, berating my husband for naming our baby Maria WHEN WE AREN’T EVEN CATHOLIC.

Not that Maria is a bad name. In fact, it is a perfectly lovely name, but I felt very strongly that Jon had taken advantage of the situation. Meaning he knew I was incapacitated and purposefully tried to screw with me. And I won’t even lie, I was mad at him for at least two days even though it was only a dream. And now I’m worried that he’s going to sneak off at the hospital and write some random name on the birth certificate, THAT DREAM WAS SO REAL. He should not be surprised when years from now we’re sitting around a table at a dinner party with friends and I go, “Did I ever tell you about the time Jon went behind my back and named our kid Maria?”