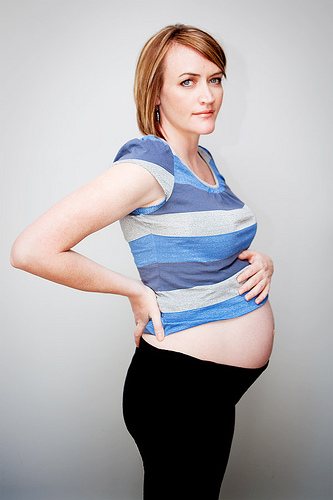 This week marks the 32nd of my pregnancy: First of all, how much does that photo look like a recreation of the new Pepsi logo? Seriously, go look at the new Pepsi logo and tell me it doesn’t look like the belly of a pregnant woman who refuses to buy maternity clothes. Or maybe the profile of a someone who had a serious run-in with a beef burrito.

Yesterday I wore a set of ridiculously tight work-out clothes when I picked up Leta from school, and as I walked in the door one of the kids in her class who was pretending to nap on a tiny cot sat up straight, pointed in horror at my belly and screamed, “YOU’RE HUGE!” I guess I hadn’t seen this particular kid in several weeks because of my book tour, so I can understand how the growth of my torso might have jarred her a bit. And because this kid has at times been aggressive with Leta I sort of fell prey to my more sinister instincts. Meaning I instantly contorted my hands and arms to look like bear claws, snarled my upper lip and then ROARED. WHILE LUNGING AT HER. I don’t know what came over me, it just seemed like the right thing to do. I’ll admit, that wasn’t one of my finer moments. But there is only so much fun you can have with all this extra body just hanging around, and scaring the living shit out of kids just happens to be at the top of that list.

Life in this third trimester is so much more uncomfortable than it was last time around, if that is even possible. I think it has everything to do with the fact that I’m five years older and certain body parts just don’t bend or maneuver with the ease that they used to. Every morning before we go upstairs for breakfast I take a look around and figure out what I’m going to need for the day. Because SO HELP ME GOD, I am only going to climb those stairs once. This means that Jon spends a good portion of his day retrieving things for me from the basement. He’s very good about not complaining about this act of service, although once after bringing me a pair of pants he dared to ask why I just didn’t put them on first thing in the morning. And I was all, dude, may you never have to experience a state of being that makes PUTTING ON PANTS such a loathsome set of contortions that you would seriously consider going grocery shopping in your panties.

Quick note: our house is built into the side of a hill so that from the front it looks like a one-story house, from the back a two-story house, and all our bedrooms are on the lower floor where one side sits against the hill and the other side opens up to the backyard. Saying “we go upstairs to the kitchen” was confusing a lot of people and causing them to cry. A lot of the houses in Utah are laid out this way because of the number of neighborhoods built into the hillside. And since I’m answering this frequently asked question, maybe I’ll just go ahead and clear up some other burning inquiries: 1) no, Mormons are not required to wear their heavenly underwear during sex, 2) we continue to live in Utah despite that fact that we are no longer Mormon because my mother has threatened to cut me out of her will if I move her grandchildren out of state, and you would stay put, too, if you thought you might lose that enormous collection of ceramic roosters, and 3) no, absolutely not, I do not recommend you go out and adopt a miniature Australian Shepherd. In order to get the breed that small they’ve had to remove the brain.