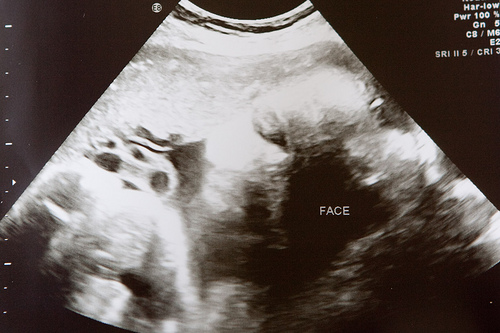 Yesterday I had a routine 35-week check-up with my OBGYN, and because my belly had not grown significantly in the last three to four weeks she ordered an ultrasound for this morning so that we could take a look at the size of the baby and the level of amniotic fluid. She seemed a tiny bit concerned, but said that it could just be that the baby had changed positions or something similarly benign. I tried not to worry too much and resisted asking Google what the hell could be wrong with my baby, because you know what Google would say, right? YOU AND YOUR BABY ARE GOING TO DIE, and here is the Wikipedia entry telling you exactly how and why. With pictures and diagrams and links to estate planning.

I had a hard time sleeping, and not just because Leta was up at 2 AM fretting about spiders. For hours I worked through scenarios in my head: what if? And then what? Because you’re constantly hearing stories as a pregnant woman that start out with a circumstance as simple as this one and in the end both the mother and the baby have to have a heart transplant. Like, yeah, my doctor thought I was measuring small, and then three weeks later I woke up in Sri Lanka with a hangover and the severed foot of a wild boar tied around my neck.

And then when I did finally fall asleep I had nothing but crazy baby dreams, one in particular in which the ultrasound technician accidentally ruptured my bag of water. In less than an hour I dilated from a zero to a ten, and before they could call my doctor the baby’s head was coming out — a head full of blonde, hair-sprayed curls tied into a ponytail with a patriotic scarf — and next thing you know I’ve given birth to a 17-pound baby who can speak in sentences. And instead of reaching out to hold her, I lean over the side of the bed and start puking green beans.

WHAT THE HELL HAVE I BEEN SMOKING?

Turns out that you can’t trust measuring tape, because the ultrasound indicates that the baby is measuring almost five days larger than her actual gestational age. In fact, the technician had to measure her head almost four times because it kept saying her head was almost as big as the head of a baby three weeks older than she is. And I’ll just go ahead and tell you that my reaction to that news was less a sense of relief and more of an OUCH.

Also, amniotic fluid looks normal and they estimate she already weighs six pounds. The doctor says it’s probably a combination of the way I’m carrying the baby plus my height that makes it seem like my belly is smaller than it should be. I’m now to carry on as if nothing ever happened, and to help with that directive they gave me the cutest ultrasound pictures of her face. I have to say, from these scans she looks a lot like Leta, although her mouth is a little more Hamilton than Armstrong: EEEEK! THERE’S A BABY IN THERE! Talk about uncontrollable crying! The technician was all, are you okay? And I was all SHE HAS A FAAAAAAACE!

Speaking of crazy dreams, Leta loves to talk to us about her own, and this one was good enough to share with you: