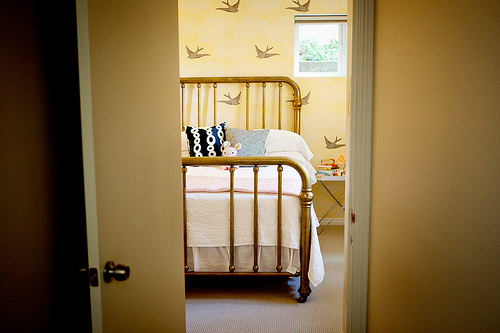 Last week we were finally able to put the final touches on the baby’s nursery after what seemed like months of living with piles of crap up to our ears. Because before we could even address the nursery we had to tackle sixteen other projects first, and in the meantime everything we were collecting for the baby started to stack up in wobbly mountains throughout the living room. Every time we had company over I had to give a rambling explanation of why the path from the front door to the kitchen was booby-trapped, why there was a stack of burp cloths plopped on top of a wad of crib sheets teetering precariously on top of a bulk package of disposable breast pads. FOR MY CRACKED AND LEAKING NIPPLES. AREN’T YOU GLAD YOU CAME OVER TO MY HOUSE?

One of the biggest things to check off our list was new carpet in the basement, something we’ve been planning to do since we moved into the house. The previous owners had a cat who lived primarily in the basement, and since we never had the carpets professionally cleaned before moving in, Jon’s allergies have made living his life nearly impossible. In fact, I may have brought up Jon’s allergies to our marriage counselor more than once, and she may have told me that OH MY GOD SHUT UP isn’t perhaps the most helpful reaction a wife can give to a husband who is complaining that his eyes have swollen shut.

So I took her advice, and the next time it happened I tossed a glass of water in his face and said SNAP OUT OF IT, FRANCIS. Much more instructive.

In the days leading up to the carpet installation I made a bet with Jon that it wouldn’t take more than 15 minutes for him to declare that his allergies had been cured. He has a habit of doing this, stumbling over cures for various ailments and announcing, “I’m healed!” before he’s even popped the pill or rubbed in the ointment. He will look at a bottle of vitamins and pronounce that he already feels better, and when I point out that I cannot take him seriously he will start listing off all the reviews he read about these vitamins, all the comparison shopping and painstaking research he did and A FIVE-STAR AMAZON RATING CANNOT BE WRONG, HEATHER.

And I am not even kidding, there wasn’t more than five square feet of new carpet on the floor when Jon handed me a twenty dollar bill and said YOU WIN. This is just another example of how well we know each other, how deeply we accept and understand each other’s various neuroses, and I’ll just go ahead and admit that I have the better deal here because I am not married to someone who is Southern.

Once the carpet was in we were able to assemble all the other moving parts, starting with an antique brass bed that my mother found at a flea market well over ten years ago: Why do we have a bed in the nursery? One, this room will serve double-duty as a guest room for the next year or so. And two, Armstrongs are not known for their peaceful sleeping habits. If this baby proves to be anything like Leta, Jon and I will most likely take turns with night duty in this room while the other one gets some sleep in our room. So let’s just say that this bed will prove as vital as my Prozac to keeping the family intact.

Next we moved in the crib: And then the dresser where all the baby clothes that Leta used to wear are now stored: Jon schlepped down boxes and boxes of those clothes from the attic last weekend, and I spent three days washing and folding tiny onesies and nightgowns in between curling up in a ball and crying about how small Leta used to be. Where did that baby go? That irritable, chubby baby who screamed a lot every day with the screaming? I remember the moment she first discovered that she could fit both of her feet into her mouth, the delight on her face revealing that she had finally found a reason to go on living.

And then fast forward to last night as I’m giving her a bath and she goes, “These bubbles won’t melt, right? Because only ice and chocolate melt. I love science!” Just to preempt any questions in the comments, here is where I got everything:

All bedding is from Target.

Crib is the Oeuf Sparrow Crib

Lamp is the Twine Floor Lamp from CB2.

Wallpaper is Daydream in yellow by Julia Rothman for Hygge & West.

Dresser is from a local place called Specialty Furniture.

Magnetic flower art on the wall is from Chiasso.

Handmade bunnies are from Loobylu.