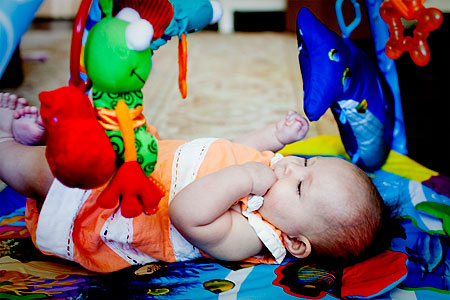 So my assistant Katey, the one who had her baby six weeks before I had Marlo, comes into work last week and goes, dude, you are not even going to believe this. And I was all, JOHNNY DEPP TOOK OFF HIS CLOTHES AND COOKED STROGANOFF IN YOUR KITCHEN? And she goes, no, something even more shocking, and I couldn’t wrap my brain around what she was even getting at, maybe the Republicans and Democrats had all finally gotten their heads out of their asses and figured out how to get sick people the health care they need? Was that it? No? DAMMIT, KATEY, WHAT IS IT? I hired you to be precise!

So she sets her four-month-old daughter Lily down on her back on the living room rug, and goes, watch this… And at first I covered my head with my arms because ANYTHING COULD HAPPEN! Infants are totally terrifying! Have you ever lived with one? OH MY GOD! At any given moment they can turn into really angry and combative drunk hobos who shoot vomit several feet into the air. Sometimes they start to gag on their tongue or on their spit or sometimes even ON AIR, and then they stop breathing for like four seconds and everyone in the room starts screaming and flailing their arms because THERE IS NO OTHER APPROPRIATE RESPONSE.

Oh, and you want to know the worst things they do, those evil babies? They catnap. Like cats. Or maybe not like cats, I wouldn’t know, I’m allergic to them and have never lived with one, except for that one time I spent a summer in an apartment with four Korean women who would not ever stop trying to convince me that kimchi is in any way edible, and when I went out of town one weekend they locked a cat in my room and it pooped on every surface including my pillow, you know what that is, right? The place upon which I rest my delicate head to sleep, oh I am still angry about that one and often bring it up in therapy. Do cats take short naps? I DO NOT KNOW THE ANSWER TO THAT QUESTION, but I do know how to answer the phone in Korean.

Also, once when I was living in LA, I used to get my nails done every couple of weeks at this tiny place run entirely by Koreans, and YOU KNOW they are totally ripping you apart and criticizing your choice in footwear and going NOT THIS BITCH AGAIN, but you have no idea what they’re saying because it’s all in Korean. And THEY KNOW they have the upper hand. So I’m sitting there and all the manicurists are firing off paragraphs to each other in Korean about the alarming shape of my chin, probably, and I sort of quietly look up and whisper, “Hello?” in Korean. YOU SHOULD HAVE SEEN THE PANIC IN THAT ROOM. Dude, they all stopped and froze in place, and they all slowly looked around at each other like INTRUDER! INTRUDER! And my manicurist goes, you speak Korean? And I say, well, a little bit, yes! Yes I do! And I’m not even kidding, no one in that room said a word for ten straight minutes. OH MY GOD, THE POWER!

Suddenly, I forgive that cat.

Worst advice you can give to someone with a newborn? Sleep when the baby sleeps. That is total and utter crap. Because one nap can be three hours and then the next nap is like fifteen seconds, and when that latter naps happens and you’ve just put your head down to go to sleep, oh Lord, the agony. And the pain. And the ANGER. And of course it’s never healthy to be angry at a newborn, bad things can happen, like suddenly you start drinking tequila at 10 AM and are calling your husband at work JUST SO THAT YOU CAN HANG UP ON HIM.

So Lily is lying there looking all innocent and cute and chubby, OH THE ROLLS ON THAT KID’S THIGHS. It takes an act of congress to clean the folds in and around that child’s bottom, I’ll just go ahead and say it, but the flip side to that is CHUBBY BABY! Nothing in this world better than a chubby baby, no there isn’t, except maybe affordable healthcare, BUT HEY, THAT’S NOT WHY YOU’RE HERE.

And all of a sudden that kid flips over onto her stomach. We’re talking FLIP. Like, with lightening speed. WHOOSH! And Katey picks her up, puts her on her back again, and as if it were an audition for Cirque du Soleil that kid whips her body over onto her stomach. TA DA! And then? AND THEN? You guys, her four-month-old is already starting to pull her knees up under her AS IF TO PROPEL HERSELF FORWARD. It was the scariest thing I think I’ve ever seen in my life!

So we’re both standing there, Katey and I, and she looks at me, and I’m biting my lip. And then she knowingly nods her head, and I’m all, yup! YOU ARE TOTALLY SCREWED.