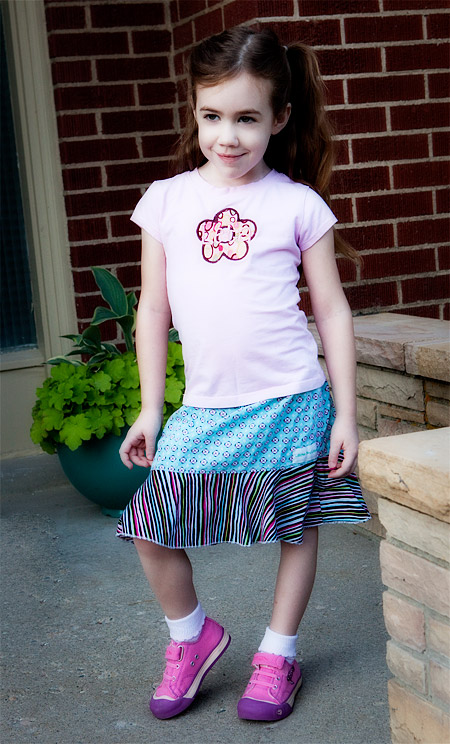 A couple of weeks ago I accompanied Leta to her kindergarten orientation where we met with her teachers and explored the various areas and features of her classroom, and y’all, there is a princess castle! IN HER ROOM! I mean, it’s not an Official Princess Castle brought to you by Hasbro or Disney or whatever, it’s just a set of wooden steps leading up to a balcony of sorts, but she didn’t know the difference and thought we were taking a tour of Heaven.

It is a magnificent kindergarten classroom, as far as kindergarten classrooms go, with tons of colorful letters and numbers on the wall, and blocks and games AND BOOKS! DON’T FORGET THE BOOKS! Mom, there is a whole box of chapter books, I just love chapter books, that’s what she kept repeating to me for three days straight, and when she’d go to open her mouth at any point during those three days I’d hold my index finger to her mouth and go LET ME GUESS! CHAPTER BOOKS! NOTED!

And then she’d gingerly remove my finger and go BUT I LOVE THEM!

I sat down with one of her teachers for a good half hour to go over classroom policies, and when the topic of lunch came up, I’ll just go ahead and be honest, I tried to change the subject. Because maybe once or twice this past week I have walked outside onto the deck in our backyard, far enough away from everything so that no one could hear me and yelled OH MY GOD I DIDN’T THINK I’D EVER LOSE THREE AND A HALF FUCKING YEARS OF MY LIFE TO HOW MANY FUCKING BITES OF THIS FUCKING BURRITO DOES SHE HAVE TO FUCKING EAT, but there they went.

A mother’s rant brought to you lovingly by three months of sleep deprivation.

I got really nervous because we once applied to a preschool before knowing that they had a really strict policy about lunch. Like, kids couldn’t pack anything processed in their lunches, and everything had to be fresh, don’t even think about sneaking in a fruit snack. Let’s just say we didn’t get our $50 application fee back.

So I’m looking around the room nervously, thinking oh no, oh no, please no, not the topic of food, and before I pass out from anxiety I just throw it out there, way out in the open, like unleashing a bull from its pen, I go LETA IS A REALLY PICKY EATER. With enough emphasis to communicate that she would rather starve herself to death before eating a peanut butter and jelly sandwich. Because bread is just the grossest thing ever, you can quote her on that.

And her teacher, without skipping a beat, she waves her hand in the air and says, “Oh, they all are.” And then she moved on to something else. Like, no big deal, we see it all the time. I wanted to start bawling from the relief, it felt exactly like every appointment we’ve had with her pediatrician who starts by taking a cursory glance at Leta, and then he turns to me and Jon and says, “Are you okay?” Like he genuinely wants to make sure we aren’t four seconds away from falling over dead.

Drop off on the first day was as difficult as I thought it would be, she clung to my arm as if she were drowning, and even though I stayed for a good twenty-five minutes and watched her climb the princess castle seven hundred times, when it was time for me to leave she was frantic. And I knew exactly how she felt, I remember the panic I experienced when my mother left me in that strange room all those years ago, but I finally knelt down and took the hand I had just used to wipe the tears from my face to wipe the ones on hers. And I handed her off to the teacher.

I lingered outside her room for just a bit and looked in to make sure that she settled in okay, and within seconds she was sitting calmly with the other kids on the colored mat in the middle of the room, a sea of little heads starting the next chapter in their lives. When I picked her up that afternoon she ran to me, my little girl who we once thought might never walk, and wrapped her arms around my neck so ferociously that I couldn’t breathe. And when she finally released her embrace she said, “Mom, can I tell you a secret?” And then in her trademark yell/whisper she grabbed my ear and screamed I LOVE MY SCHOOL AND I PLAYED ON THE COMPUTERS AND THE PRINCESS CASTLE AND I JUST LOVE IT SO MUCH! And then as we held hands and walked to the car she talked about the lunch room and the big tables and the playground and her friend with the yellow hair and the other one with the brown hair but it was much shorter than hers, and IT’S OKAY TO TAKE A BREATH, LETA.

It felt like a Volkswagon commercial, here I am this disheveled suburban mom buckling in her kid who WILL NOT STOP TALKING, and it’s adorable, yes, but then all the words start to blend together, and the dialogue did not stop as I closed her door and walked around to the front of the car, I could still see her lips moving.

When I opened my door and climbed in it was still going on, the paragraphs and paragraphs of kindergarten awesomeness filled every available inch of space in the car. And I sat there for a second looking at her in the rearview mirror and thought, we just did it. We just lived that day together, she and I, we just took that monumental next step forward, and I’m so glad that I got to do it with her. And years from now when we’ve met for dinner and a glass of wine, we’ll talk about this day specifically. And I won’t even bring up the burritos.