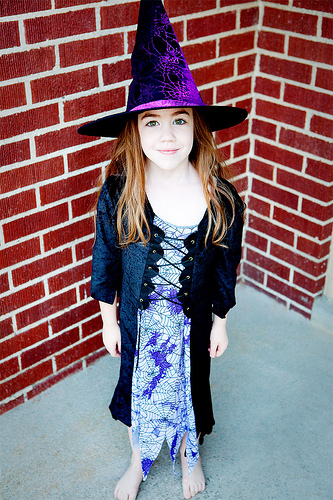 Halloween was a total blur, mainly because we spent the week leading up to it trying to iron out the bugs of the community website, and as usual I waited until the last minute to buy candy and the only thing left at the grocery store was really expensive dark chocolate that makes little kids throw up.

So now not only are we the reclusive Internet people who run some sort of online website, have you heard? That house where that little shit of a dog escaped the house one time and chased that woman who was jogging along, minding her own business, and caught up with her and grabbed the bottom of her pants with her fangs? HELLO HEART ATTACK. AND LAW SUIT WAITING TO HAPPEN.

Now we’re the house that gives out crap candy. Except one kid dressed up as a hippie saw the bowl and was all DUDE! I LOVE DARK CHOCOLATE! That’s a boy beyond his years. I bet he’s a good listener and routinely hugs his mother.

Leta went over to her cousins’ house and trick-or-treated with all of my sister’s kids, and they say that she got fatigued after about an hour and started dragging her feet going I’M SO TIRED. SO TIIIIIIIRED. So my niece said, fine, let’s go home, and then Leta realized that going home meant an end to the waterfall of candy, so she’d say, okay, JUST MORE HOUSE. ONE. MORE. And that exact dialogue continued for twenty more houses. And I was all, really? That happened? How surprising. And then this morning when she refused to get dressed and I threatened to take away all that Halloween candy? Apparently I was treating her “like she was zero years old.” I didn’t see that one coming.

We stayed home with Marlo to hand out candy and troubleshoot the website. Meaning I made it all the way to 8:30 PM, and while I slept Jon sat beside me in bed with his laptop straightening out code. 8:30, y’all! Can I get a very awkward high-five and a HOLLA! That was the latest I had stayed up in MONTHS. SOMEONE STOP ME! Next thing you know I’m going to be spiking my Metamucil with blackberry schnapps! Next week, the dogs in costumes! Coco is still exhausted from all the brain power it took to remain still for a photograph.