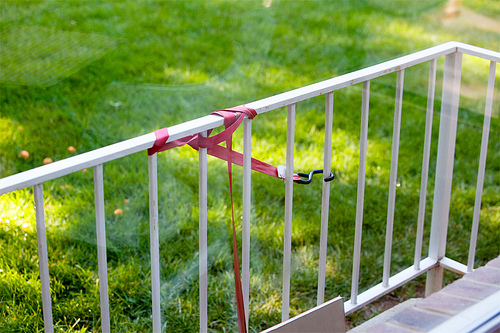 If you haven’t been following Tyrant’s Flickr stream, you really should be, especially the video of the evil squirrel in our apricot tree. If you have dogs be sure to have them sitting nearby when watching this video because the memory of their reaction should keep you entertained for months. Just make sure nothing breakable is anywhere in the room:

Really quick… Leta and I were at my sister’s house on Saturday night for a family gathering in honor of my niece heading off to college. Jon stayed at home to put Marlo to bed, and at about 5:30 I got this text message:

My first thought was, seriously. The universe is totally screwing with me. I was totally kidding about this becoming the savage wild animal blog. KIDDING. Except I guess the Universe doesn’t have a sense of humor like some of my more vocal critics and is all DON’T YOU KNOW FEEDING VODKA TO INFANTS IS DANGEROUS.

Actually, vodka is very good at numbing the gums when the infant is teething, MOM.

I got home several hours later and made Jon tell me every detail because that squirrel was still in the window well. That giant squirrel. There are two who rule the back yard, and we identify them as Giant Squirrel and Little Squirrel. And I just realized how boring that is. They need proper names. Something like Notorious G and Lil Squee. And we’ll pretend they’re both originally from the Bronx.

The story goes: Coco began barking maniacally at the door leading to the back patio. Jon got up off the couch to investigate and saw Notorious G sitting on top of the patio coffee table and was all whoa, whoa, whoa. You can have the trees, G, but anything pertaining to the house is off limits. He communicated this to the squirrel by opening the door and telling Coco to GIT EEM.

Coco burst out onto the patio sending the squirrel clambering underneath the wicker ottoman. Chuck was upstairs somewhere reading Emily Dickinson, heard the piercing noises coming from both Notorious G and Coco, and then came running to see what the fuss was all about. Jon let him out immediately where he joined Coco in trying to crawl underneath the three-inch opening at the bottom of the ottoman. Let me take a moment here and say that dogs are really stupid.

Suddenly Notorious G lurched out from under the ottoman, dashed across the patio and headed to the first hiding place he could find. That happened to be the ten-foot-deep window well leading to one of the bedrooms in the basement. And that’s when Jon texted me. Well, after the dogs had followed the squirrel over to the well, realized they couldn’t eat him, and started crying like little babies.

Before I went to bed I found a self-racheting tie-down that we use when carting things on top of our car and secured it to the fence lining the window well, leaving enough dangling into the well that the squirrel could use it to escape. Except, he was still there the next morning, and neither Coco nor Chuck would go and do their business. Instead, they craned their heads through the metal fence and made this noise:

Like they were strapped down and being stabbed with hot pokers.

I made it pretty clear to Jon that I would not be able to live with myself if this squirrel died in our window well knowing that we could have done something about it, and after I asked the Internet for advice he went to the shed and found a twelve-foot-long piece of sheet rock. After some pretty expert maneuvering, we were able to bend it without breaking it so that it resembled a ramp. Then I lined the top with peanut butter. Finally, I called the dogs in and tried to keep it quiet for several hours. Kind of hard to do when your infant is cutting six teeth simultaneously.

Fast forward a few hours and Notorious G was no longer inhabiting the window well. We assumed he had escaped, although we haven’t seen him since. I think he’s either hiding out for a while or looking for new turf. However, Lil Squee learned nothing from this encounter, and I know that he knew what was going on. Because he was throwing apricots at our head the entire time we were trying to save his sidekick. Can you even believe the nerve? You get stuck in that well, buddy, and I’m going to lower Coco in with a rope. That wasn’t such a quick aside, was it?

The office remodel is coming along in the sense that most of the furniture that I’ve ordered has been delivered, minus a few storage units that we need to pick up. Some heavy decisions have been made, most important among them being the paint color: none.

I wanted to go with a few shades of gray throughout the whole room, but both Jon and Tyrant started making gagging noises, and I was all OH JUST SHUT UP. FINE. By keeping everything white the light gets reflected all over the room, and the angles will blend more seamlessly into each other than if we use different colors. Also, no extra cost! And no, the money we save doesn’t get added on to Tyrant’s check. Although I will admit that’s pretty sneaky YOUR MAJESTY.

Also, one of those crazy nooks is going to be used to house our color printer, and I’m going to set up the other one as a Daily Style photography space. The light comes in from the west through those windows, so for most of the day it’s perfect for taking shots in natural light. Ah hah! Some of you thought I had no idea what I was talking about when it comes to design! But you just didn’t count on the fact that I could fake it so well.

Tyrant’s office is also almost complete, minus some pictures and shelving units. Jon and I were browsing an outlet store the other day just looking around to see if there was anything interesting hidden in the shelves behind vinyl shower curtains decorated with smiling pineapples. And we found this awful, horrifying tiki planter and came up with the idea that we’d leave it on Tyrant’s desk, let him find it and sweat it for a while, and then tell him that we’d decided to go with a wild Polynesian theme in his room. Except before we could set him up he put an orchid inside it, took a picture, and told us he adored it. Couldn’t wait to see the tiki bar we planned to put underneath his window. Next week we’ll have our second video installment featuring all the furniture I picked out, plus I’m going to get Tyrant on camera in all his glory. Anyone have any suggestions as to which dance move I should attempt next? Remember, I have no shame.