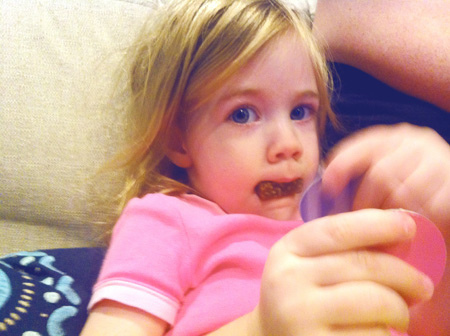 A couple of months ago we weaned Marlo off of her morning bottle. SHUT IT. I know. What is a two-year-old doing with a damn bottle? Well let me tell you! Letting my cuddly two-year-old drink a bottle in the morning is much less invasive than having my husband go back to the doctor to have his vasectomy reversed, because OMG BABIES.

See? I want a baby, but I DO NOT want a baby. The sleep-deprived Heather with a three-month-old knew that this would happen so she had the foresight to prevent such nonsense. She’s like, Heather? You’re sleeping through the night and your boobs are not engorged! You can leave the house for more than an hour at a time! Also! Your husband is really old and people are going to ask your kids if he’s their grandfather.

We let her have that bottle for a few months longer than necessary, but whatever. When she gets booked for grand theft her attorneys will not be able to trace it back to this particular parental weakness. No, instead they’ll be like, “It says here that your mother wrote about you on the Internet. And joked about you committing crimes.”

Jon makes a shake every morning out of ice, orange juice, strawberries, and bananas. So we made the switch easily from bottle to shake. Sometimes, though, he’s a little slow about it, so Marlo joins me in enjoying a gluten-free bar of some sort. What? I could give her a bar with grains in it, but then if she didn’t eat it all then I couldn’t finish it for her. If it’s gluten-free, I can. No waste! I’m saving the world!

She likes the peanut butter bar, so I’ll grab one of those and a cherry one for me, and then we’ll eat them on the couch while watching the morning news. Inevitably she will try to get off the couch with that bar in her hand, crumbs shooting out all over the floor as she tumbles around the living room. Yay for the dogs, but she’s breaking the rules, so I’ll jump up and yank the bar out of her hand.

Surprisingly, Marlo is a bit smarter than Leta was when throwing her body onto a surface. Leta usually chose the wooden floor. Marlo goes for softer surfaces like the couch or a dog bed. No, I don’t ever suddenly yank the dog bed out from under her so that she lands face-first on the floor, but now you’ve planted the idea in my head.

The seed. It will grow.

Yesterday morning we were enjoying our bars, and I sat there watching the news while she flipped through a book right next to me. I looked over to see how she was doing and noticed that the bar was gone. Poof! She doesn’t ever finish hers that fast so I asked her where she had put it.

I ran my hand under her left leg, then her right. I checked under her butt. I flipped through every page of that book. No sign of that bar, and then she said it again, “Nnn mmmm mmmmthhh.” These photos are courtesy of her very good looking grandfather father, who at one point told her to smile. She tried, but since her mouth was full of that bar, you can only see it in her eyes.