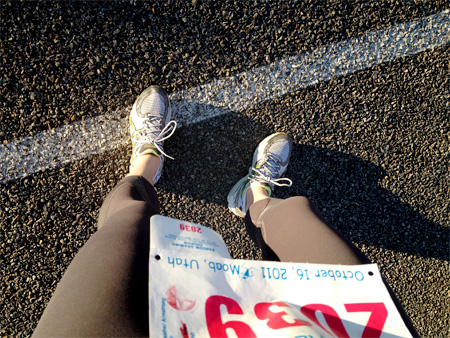 You know I’m just making up these injuries, right? I need content for my blog. It’s the same with the kids. Leta and Marlo don’t actually exist. I make up the stories, and the kids in the photos are actors. When we hired Leta we were like SCORE, because how much does that kid look like Jon?

We’ve thought about buying a life-like animatronic cat, but damn, those things are expensive. And then I’d have to make up a story about Marlo jumping on its back and breaking it, and then we’ve spent all that money for one blog entry? NO. There I was climbing a hill at mile 8 in The Other Half Marathon in Moab on Sunday, feeling so incredible, so in love with running and with the idea of racing that I almost started singing church hymns out loud. But I didn’t because that would have wasted precious energy, and I was being smart! SMART, I TELL YOU. I knew I wasn’t going to win the race, so I decided to be the valedictorian of energy conservation.

I was fueled up, keeping a steady, brisk pace, eager for another mile. I had studied the route and the elevation of the route prior to the race, and I knew that we’d have to climb several hundred feet between miles 7 and 9. But I didn’t know that smack in the middle of that elevation were three giant hills. Like, straight up. Hold out your forefinger. Point to the sky. Now imagine running up your finger, except your finger is 500 yards long.

I hadn’t practiced hills like that before, and I noticed that most people around me were were slowing their running to a walk. But I found it easier to get up the hills by continuing to run. Here’s where I’m trying to figure out what happened, because I didn’t twist my ankle or turn it or step on a rock or ANYTHING. I was just running. I didn’t do anything stupid. VALEDICTORIAN OF NOT DOING ANYTHING STUPID. I have a certificate, and everything.

Suddenly, a few tenths of a mile after completing those hills I came down on my right foot and I thought I had stepped in a puddle of upturned knives. Sharp, squealing pain flooded my ankle and up the outer part of my lower leg. Burning. Throbbing. I looked down and expected to see fire erupting out of my shoe.

For the next few tenths of a mile I continued my pace even though the pain continued. I used that time to weigh my options. Do I stop and wait for someone to pick me up? How long would I have to wait? Maybe I should just run as far as I could so that walking to the finish line was an option. But walking was going to be as painful as running, so why not just finish the race? Of course! DUH. I’d finish the race.

If you asked me how I could ignore that kind of pain and continue to run almost four miles, I wouldn’t be able to tell you. I don’t know how I did it. The pain was there, it shrieked every time my right foot touched the ground, but somehow I pushed it to the periphery of my brain. It’s a lot like parenthood.

I crossed the finish line with an official time of 2 hours 7 minutes 19 seconds. That’s nine minutes faster than when I ran the same distance at the end of September. I credit that progress to carbs, the racing environment, and really, really wanting to see a doctor.

The medics wrapped my swollen ankle with a bandage, loaded me up with ibuprofen and told me to see my primary care physician once I got home. And I did that last night, but the x-rays didn’t show a damn thing. So I’m off to the orthopedic clinic AGAIN because I can barely walk, let alone run. I’m trying to stay calm and not go back and read those comments where people are all, I’ve been running for twenty years and never had an injury! You must be doing something wrong! YES. Obviously I’m doing it wrong. IT IS ABUNDANTLY CLEAR THAT I AM DOING IT WRONG.

But, dammit, if I have to walk that marathon on crutches, that is what I’m going to do.