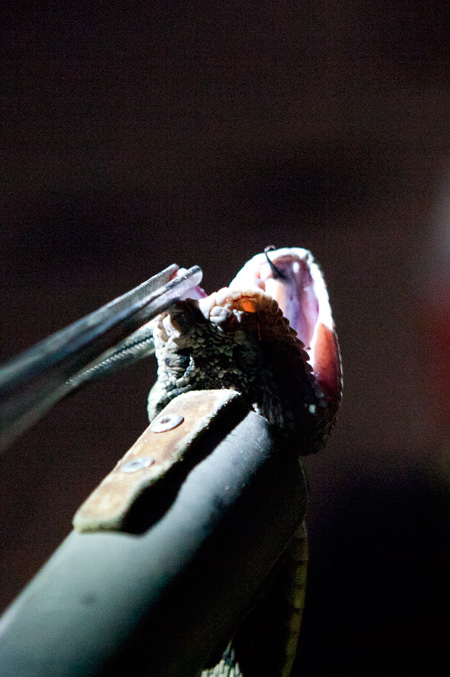 You guys remember when that rattlesnake in the backyard almost killed my dog and swallowed my kid? Don’t worry, animal lovers. We never found him, so I’m sure he’s living comfortably somewhere in some cozy nook UNDERNEATH MY BED. That’s why I sleep with a shovel. And a butcher knife. In my bathtub.

Marlo refuses to listen to any instructions concerning snake safety. I’ve tried numerous times to explain to her that she should avoid anything wiggling around in the grass like that, but when I get to the part where the word snake comes out of my mouth she loses her mind and squeals “STHNAAAAAKE!” Clapping her hands and jumping up and down as if I’ve just promised to get her one for Christmas.

Someday that kid is going to own one hell of a truck stop.

The vet recommended snake training for the dogs, and one night a couple of weeks ago we took them to a parking lot where they would get to meet live, poisonous creatures who headline my nightmares. We joined a group of five other unsuspecting dogs and watched as the dog trainer and snake handler defanged the snakes right in front of us:

Okay. First of all, snakes are grumpy anyway. I’m happy that they wouldn’t be able to land a deadly bite on my face, but do we really need to have them undergo unmedicated dental work? If I were a rattlesnake and you yanked out my teeth without any anesthetic and then coaxed your dog to sniff me, dude. Your khaki pants are the first pair I’m going to slither up. Guard your balls.

The gist of the training goes something like this: the dog needs to see the snake, needs to observe its movement and behavior, and then he needs to smell the snake. Its scent is the most important part because that is what the dog will associate with the electrical shock sent through a collar on his neck. Yes. A shock collar. One that shocks. A collar that inflicts pain. Please begin your hate mail with, “Dear Wondrous Being of Light and Splendor.”

So. Chuck. The resident aesthete. He who rolls his eyes at humans because they have to rely on autocorrect when texting. I walked him as close as I could to the snake and he wanted NOTHING to do with it. He observed it, cocked his head a bit, and then made it very clear that he knew he wasn’t supposed to go near it. In fact, he stood up on his hind legs, turned around to everyone watching and said, “You idiots do realize that a poisonous snake is sitting right there?”

And thus concluded his speech as the valedictorian of snake training.

However, the training required that he associate a shock with the smell of the snake. I had to physically drag him a few feet downwind of that reptile so that the trainer could activate the shock collar. You guys, Chuck is still mad about this. Really, really mad. If I die because someone threw a toaster into my tub water YOU KNOW WHERE TO LOOK. In fact, he’ll probably have written a poem about it. Someone please read it out loud at my funeral.

However, this training totally works. In fact, watching each dog learn to associate the scent of the snake with the shock was better than some of the shit I’ve seen on Broadway. Totally fascinating. One golden retriever mix caught on so quickly that during the second and third exercises when he got within ten feet of the snake (at that point hidden from view) he turned, ran, and tried to claw his way inside of a locked car. That dog is smarter than Marlo.

And then… well… the idiot dog. Good lord. Okay. I’m going to blame this more on her breed and less on the size of her brain, because she just did not get it. Shock her straight to hell, there was a foreign creature right there and I, the woman who feeds her and is her constant companion, was near it. No way was she going to leave my side. She had to protect me. If I start to think about it I’ll tear up a bit until I remember that one time she pooped on the kitchen floor while I was eating dinner.

The trainer finally had to leave Coco alone with the snake and shock her enough times that she wouldn’t stick her nose in its mouth. I won’t tell you how many times he had to shock her because you’ve already written your hate mail and I don’t want you to have to edit it.

But here’s the kicker. You guys, I stood less than two feet away from a rattlesnake and I didn’t have a heart attack. I wanted to. I wanted a piano to magically appear and fall on my head. Death by piano sounded better than the rattle of that pissed off snake. No, I didn’t have a barbaric collar equipped with an electrical current affixed to my body, but I’m pretty much the valedictorian of not shitting my pants while standing two feet away from a rattlesnake (just updated my resumé).