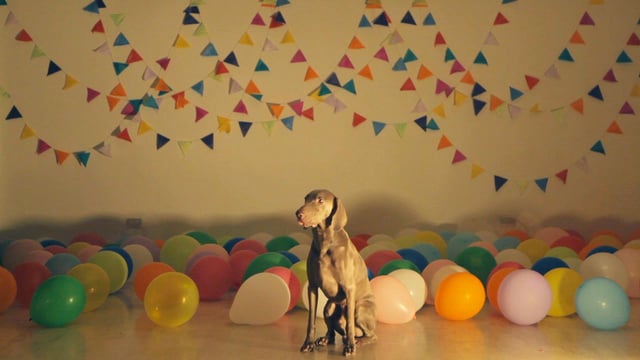 Marlo is turning three years old this week, and I’ve mentioned before that she has a bit of an obsession with stuffed animals, specifically puppies. I serendipitously stumbled onto this video and I can’t wait to show it to her because it combines two of her favorite things: a birthday party and a dog. Wait for it.

This video is also quite reminiscent of the Weimaraner sketches done on Sesame Street in the 90’s which were my favorite part about sitting down with Leta years ago and watching all those endless episodes. These sketches rival anything on television. Yes, anything. Make me decide between Weimaraners making bread or an episode of Game of Thrones and suddenly it’s a Sophie’s Choice scenario up in here.

Several months ago I tweeted offhandedly, “Aw, poor thing. He didn’t choose to be born a Weimaraner.” And the literal Internet came after me with torches. I don’t think any of my almost 3,000 tweets have ever been as misunderstood. You guys, I’ve never met a Weimaraner I didn’t love. But, come on. You have to admit that you could explain almost every psychiatric disorder simply by holding up a picture of one.