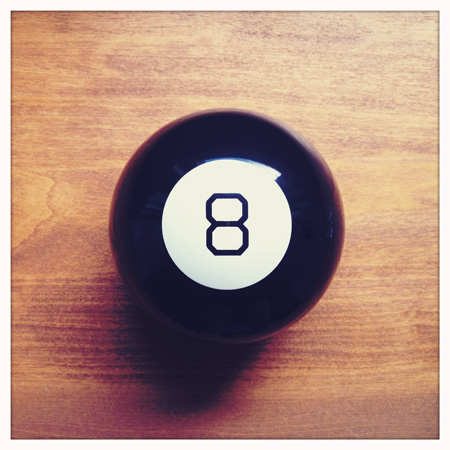 On Friday Leta came up to the office while I was working, sat down in the empty chair next to my desk and asked, “Mom, do you know what a Magic 8 Ball is?” That’s one of the fun parts about working from home, especially during the summer when Leta is just hanging around. She can walk in at any time during the day and rattle off the most random sentence. Once it was, “I do not like butter.” I didn’t know how to respond to that sudden declaration so I just nodded to assure her that I had her back, like, yeah. Fuck butter.

I told her that I did indeed know what a Magic 8 Ball is. There were toys when I was a kid, too, LETA. I once saved the princess in Super Mario Bros., you know. I might not have been holding the game in the palm of my hand BUT IT EXISTED. Here, let me show you the permanent muscle damage done to my right thumb from aggressively pushing the A and B buttons on the Nintendo controller that was wired to the box. WIRED. We had wires and WE LIKED IT.

Oh, right. Where were we? Magic 8 Ball. Leta saw one in a movie and wondered if she could get one. I didn’t see why not, so on Saturday while out running errands we picked one up. I opened the box right there for her so she could play with it in the car on the ride home, and I knew it was going to be a fantastic ride when she suddenly blurted out from the back seat, “I HAVE WAITED A WHOLE ENTIRE DAY FOR THIS MOMENT.”

“What should I ask it?” she muttered as she passed it from one hand to the other.

“What are the burning questions OF YOUR LIFE?!” I teased because she had not an hour earlier claimed that her life was nothing but boredom! She was so boooooooored! And I was not helping her with her booooooooredom! My child does not have a Southern accent, yet she can take any one-syllable word and wring at least five distinct syllables out of it. I done good.

“Magic 8 ball, ” she started, “is school going to be good this year?” Then she shook it, waited for the answer to pop up and she screamed.

“It’s been a few seconds. That’s later. Try it again.”

“MAGIC 8 BALL!” This time she was yelling. “IS SCHOOL GOING TO BE GOOD THIS YEAR?” She shook the ball, brought it closer to her glasses to inspect it and said, “IT IS CERTAIN. What is that supposed to mean?”

“That means yes. Yes, school is going to be good this year.”

“Because the makers of the Magic 8 Ball have to somehow differentiate it from a coin toss which would cost you as little as a penny. And look! They did. We just gave them nine dollars so that they could be purposefully vague. So we pretty much just killed a rainforest.”

“What are you even—”

“It is certain means yes.”

“THIS IS THE BEST THING THAT HAS EVER HAPPENED TO ME.”

Who isn’t helping out with the booooooooredom now?