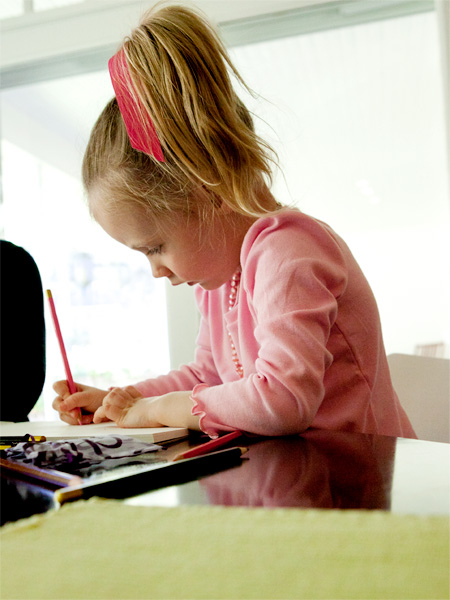 Leta loved the watercolor pencils that Leah brought up from San Diego, and in addition to drawing a very neat tree with very neat lines and very neat edges, she’s also drawn a very neat flower and a very neat heart. When she painted over each of these illustrations, the water remained in a small, neat area at the center of her canvas. I take full credit for Leta. I made her. I am very proud.

Marlo, however, is a fucking Golden Retriever when it comes to water. I’m certain that if we lived in a climate where rain was a frequent phenomenon, I would constantly have to prevent her from throwing herself headfirst into two-inch deep puddles.

Whenever we visited the pool this summer she would start walking from the shallow end toward the deeper water, and if I had let her she would have kept going until it was covering her head, her entire body under water EXACTLY where she wanted it. So when I attempted to pull her to safety she would fight me so hard it looked to bystanders like I was trying to drown her. Don’t call DCFS, folks. Call animal control.

Her new favorite activity is washing dishes, and she will stand on a stool at the kitchen sink washing the same four plastic bowls for over an hour. Sometimes if she thinks I’m not paying attention she will lean over as far as she can to try to stick her head underneath the running water. Sometimes she will cup her hands to fill them and then dump the water down the front of her shirt. If I were to roll her over and scratch her belly her hind leg would start kicking.

I’m less inclined to take credit for Marlo and much more likely to drop her off at preschool and say that I found her wandering around in the parking lot.