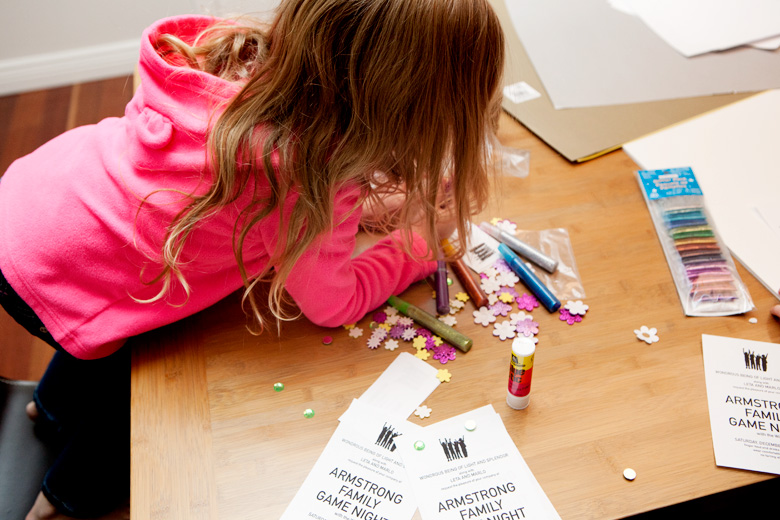 This year the girls and I joined all 4,800 members of my family for Thanksgiving at my sister’s house where luckily we enjoyed indulgent servings of turkey while avoiding talk of politics and religion, something we hope to replicate when we gather a few more times during the holidays. I contributed a total of ZERO to the meal because I’m not allowed to use an oven without someone standing nearby with a fire extinguisher. Hey, we all have our talents. My sister can whip up a potato casserole in her sleep. Me? I can’t cook, but I can name every contestant who has ever competed in all 19 cycles of “America’s Next Top Model.”

You just wait. When the zombies attack they’ll go after my addled brain last. Think about that the next time you pick up a BOOK. And READ.

(Fun game: when you see someone reading a book in public, walk right up to them and whisper, “Zombie bait.”)

To make up for my lack of contribution I decided that we could host the whole family for a game night with the new WiiU console. It’s an early Christmas gift for the girls (and also their biggest), and it’s something the whole family can enjoy together. In an effort to prove that I am not completely paralyzed in all things domestic, I decided that I’d actually spruce it up a bit. The girls could help me make invitations. I could throw together some easy recipes. There could be a structured yet flexible agenda. We’re not going to have an opening and closing prayer, but LOOK AT ME. I am trying. And I am only panicking a lot.

First goal: invitations. When I mentioned the party to Leta and the idea of designing invitations she asked, “Why don’t you just text everyone?”

Oh, snap. Her generation has everything figured out. Could they please hurry up curing cancer?

You don’t think I already had that thought? You don’t think I wanted to text my mom, mention the party and tell her to tell everyone else? That, Leta, is domestic paralysis. We are here to grow.

So I asked her what she thought they should say.

“How about, ‘Come to our party,'” she said flatly.

“That’s generally how an invitation goes, yes,” I said. “Anything else? Anything creative?”

“This is going to sound weird,” she answered, her voice finally animated. “Can you tell everyone that they aren’t allowed to fart? Whenever your family gets together it’s… it’s… it’s all they do!”

My family is going to be so proud that she noticed.

I whipped up a design in Illustrator with a free vector image I found online, and decided that part of the agenda would be game tickets. We’d split up into teams and whichever team ends up with the most tickets (the most wins) would get a prize. I asked for Leta’s input on a prize and I think she’s headed for my level of domestic paralysis.

She could have said anything: a house! A car! A Caribbean cruise! George Clooney! But no. Chocolate. The winning team gets chocolate. You SO do not want to be up against a team with more than two menstruating members.

I bought a few supplies so that the girls could help me make the invitations a little more colorful, and what you are about to see is photographic evidence of CRAFTING taking place under my roof. Yes, I crafted. There was crafting. SEE-to the-ARE-to the-AFF-to the-TING. Glitter and glue and construction paper and stickers. However, I was not about to let Marlo see a pair of scissors. Because I value human life.

I’d do the cutting. They’d do the glittering.

I’m sure glitter glue is intuitive to you, but the part of my brain that knows how to get the glue out of the tube is occupied by contestants Elyse, Adrianne, Camille, Shandi, Yoanna, Cassie, Tocara, Eva, Niama, Isis, CariDee, and Bianca.

It became clear very early into the crafting that Marlo wasn’t interested in the invitations whatsoever, so I just handed her a scrap of paper and told her to go to town. And she did, she glued and stickered and glittered every inch of that scrap of paper and was super proud of her work until she held it up to show us and everything fell off of it. That’s when she totally lost it and started throwing glitter tubes and punching the table, and I was like DING DING DING, WE HAVE A WINNER. And that winner’s name? Why I Don’t Craft.

We got in a solid 30 minutes of memories before that meltdown, though. And here’s where I admit that sometimes when I look at social media I feel like my kids are missing out. I see all these photos of kids and their moms doing fun projects together, and I think, what is wrong with me that I don’t like that stuff? I start to feel like I don’t measure up. GUILT GUILT GUILT, a mother’s favorite meal! Scrolling through Instagram, it’s all that she will feel!

So I try to go back to something I learned in therapy last year, and that is to go through the list of the things my kids need the most. Do they know they are loved? Are they comforted when they cry? Are they warm when they sleep? Are their joy and excitement celebrated? Can they willfully scratch their butt in front of you and not feel judged?

I bit my tongue as I removed Marlo from the glitter and the glue and instead of raising my voice I said, “Okay, it looks like we are done decorating the invitations to the party.” She had been kicking and writhing until she heard me say PARTY, and her tears magically crawled back up into her eyes and she screamed, “Party?! Can I come?! CAN I?!”

What did she think we were doing in there? Brining a damn chicken?

Yes, little one. You can come to the party. Let’s celebrate that joy. You can come and so can the other 4,800 members of my family. And when they get here we can have that meltdown together.