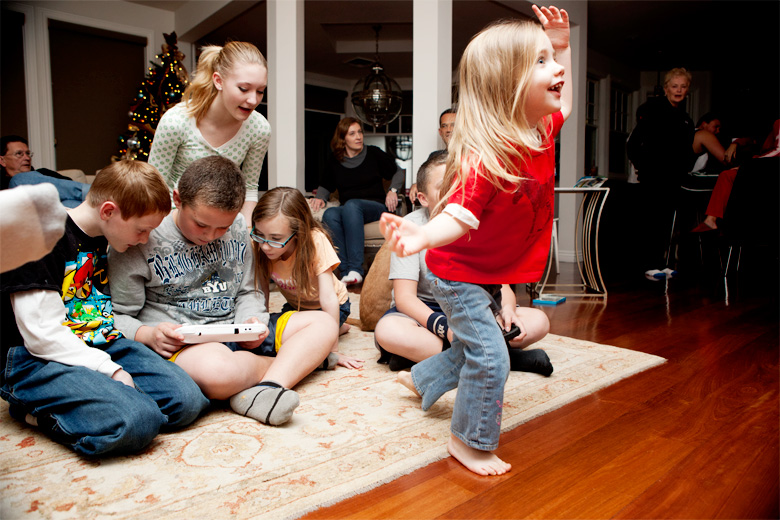 Saturday afternoon I tried to keep everything pretty low key with the girls in the hours leading up to the Armstrong Family Game Night for a couple of reasons. One, being around their cousins is not unlike freebasing cocaine, and I knew they’d need their strength to survive the high. Two, I needed both of my hands to start making food: one to call for takeout, the other to scratch my butt.

I think cooking was the part of the party I was dreading the most, and my mother could instinctively tell in the days leading up to it. So she called me up last week and was like, listen. You’re about to have a panic attack, don’t ask me how I know, this is your mother, the one who used to call you your freshman year in college just as you were about to crawl underneath your bed and cry over making an A- in calculus, yes I still remember that, and no I’ll never let you live it down. Please step away from the food processor.

So I stuck to the recipe I knew best:

The only way to make that recipe any easier is to take out the “cut sweet potatoes into chunks” part, a skill any fourth-grader could perform, yes, but it’s still work nonetheless. I know why you have to cut them up (googled it just now), but when you order takeout THEY ARE ALREADY CUT UP. Cutting up a potato is far more labor intensive than pressing REDIAL on your phone. This is why I will never understand cooking.

My mother made the cranberry salad and the Rotel dip, and my sister brought over the Little Smokies, plus a little something extra. Peanut butter Rice Krispie Treats.

Here’s the thing though: as everyone started to arrive the chicken and potatoes had been cooking for over four hours. My house smelled like the highest degree of Mormon Heaven. Everyone wanted to know what was cooking and I got to take credit for having made food. No one believed me, and I don’t blame them. I was so proud that I suggested someone bless the food. That way if my recipe made anyone sick I could shrug, point to the sky and say, “Take it up with that guy.”

Let’s show you some of the attendees. Here’s my dad. Mike Hamilton. Mike from Tennessee. Do not ever ask this man to lend you money:

You guys remember Dane, right? Dane doesn’t know who Björk is. I just thought I’d throw that in because he looks a little too perfect here.

This is Adam, my brother’s youngest kid. He remained in this exact position all night. I may or may not have written “AND EVE” on his forehead in permanent black marker:

This is Sienna, my brother’s oldest kid. I was there when she was born and now she’s in high school. Writing that just now reminded me to go take my Prozac.

Benjamin, my brother’s fourth kid. He said he was acting tough and I said, right. You’re just imitating what your father does when he gets out of the shower, looks in the mirror and thinks no one is watching.

Speaking of his father! Hey, everybody at Intermountain Healthcare! Here’s dooce’s brother! Please mention this to him next time you see him!

This is Rachel, my brother’s second kid. It’s a shame that no one in that family looks anything alike.

Benjamin on the left, Talon on the right. Talon is Ranger’s third kid, his first son. My brother is the only male remaining to pass on the Hamilton name, so when Talon came along that 30-year bout of constipation my father had suddenly disappeared.

They are my sister’s youngest kids. And this is my sister September. She’s the one who taught me how to not smile.

Ok. Game playing. At first there was an agenda and a plan and a strategy and we were going to split up into teams but then kids started to fall over. Plans? Strategies? WORST IDEA EVER. So I threw up my hands and said, y’all have a it. Just don’t break anything.

And then something broke.

So I called in a meticulous gay man to come fix it. I joked that when I would eventually sit down to write about this that it was going to end up being Dane’s official dating profile because he kept stepping in to repair things (he brought in extra chairs, found napkins, set up tables, located batteries, looked absolutely dashing). Here he figured out that the sensor on the console was not picking up everyone’s movements because it was not positioned correctly near the television.

Really, all his dating profile would need to say is: great with kids. Girls would be knocking down his door. Except… YEAH.

While Dane fixed everything we were sitting around the living room waiting, so to pass the time I asked if anyone knew any good jokes. Talon immediately raised his hand. Oh, kids. Kids, kids, kids. You guys think you know a good joke is but they always end up being about poop or farts. Which is why you are always invited to my party.

So Talon starts in and we all get quiet.

“So there were these three guys and they decided that they’d have a contest to see who could collect the most ping pong balls. And the first guy, he came back after a day and he had a whole truckload full of ping pong balls. The second guy didn’t come back for a few days, but when he did he had two truckloads of ping pong balls. The third guy? Well, he never came back. So the first two guys went out looking for him and when they found him he was totally beaten up and he had a black eye and his head was bleeding. And he was just sitting there next to two huge, gross balls. So they go, ‘What happened? You were supposed to meet back up with us so we could find out who collected the most ping pong balls.’ And he says, ‘Ping pong balls? I thought you said King Kong’s balls!'”

Poop and farts and balls. I knew I was forgetting one.

I thought every kid in that room was going to pass out from laughing. I looked at my brother and was like, did YOU tell him that one? He was just as surprised as I was, proudly threw his fist in the air and declared, “THE MANTLE. IT HAS BEEN PASSED.”

(Quick heads up: Federated Media, my ad partners, are hosting a sweepstakes for a chance to win a Wii U™ Deluxe Set and $5,000 to take your family on vacation. I’d go anywhere where it wasn’t snowing.)

I know you are all wondering, so: no one farted. However, while we were waiting for Dane to fix the sensor, Marlo told everyone to be quiet and then she burped. I raised her right, though, and she said, “Excuse me.”