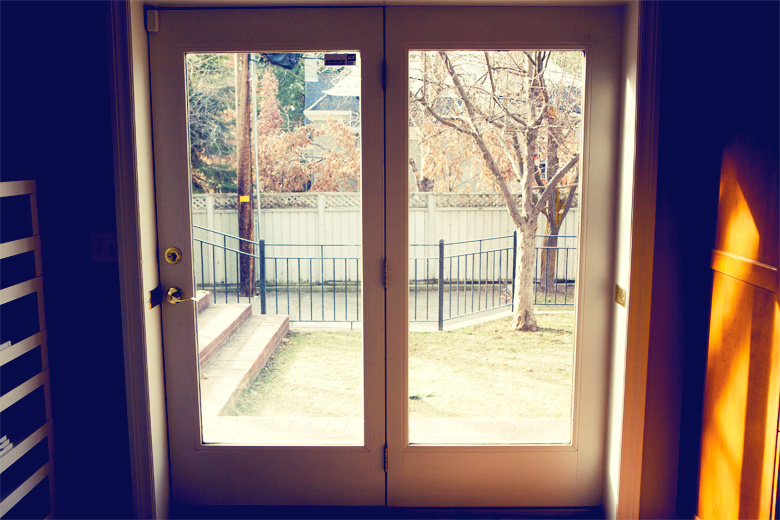 Friday morning after letting the dogs out of their crates and going through their morning routines, we all settled down into my office so that I could get an early start on some lingering projects. A mommyblogger has projects, you ask? Listen. These pajamas are not going to wear themselves. And those pictures of baby kangaroos on Pinterest WILL NOT HAVE BEEN PINNED IN VAIN.

This office resides in what’s called a walk-out basement. This means that the house is built on a slope, so part of the basement is above ground. My office has doors that open to a fenced-in backyard, one with no broken boards or spaces through which Chuck could wiggle his way out and give me a heart attack. That was a fun game he used to play. Escape the backyard and see how quickly the ambulance would respond. Return home and pee on the walls. I called this game Who’s The Biggest Dick, Who?

I was sitting at my desk when suddenly Coco leapt from her dog bed and pounded her head on the glass door. The thud coincided with a string of raucous barks and wheezing so violent, so shrill that the vibrations cracked a portion of my spine. My first thought was: DAMN SQUIRRELS. My second thought was: they are going to taste so good in my slow cooker.

I hopped up from my desk and walked over to quiet Coco when… I… I… I saw it. It. IT. The very good reason Coco was losing her mind. You know, I thought I was leaving behind the birds who would show up and die on my doorstep, the mythical bobcats, the rattlesnakes. Sure, squirrels are going to show up wherever I go, but the rest of it? I SOLD IT. I paid a real estate agent a very healthy commission to help me get rid of it. A very happy couple bought it. And when that first bird shows up an keels over they can ponder the reasons why while soaking in that giant copper tub.

What is it about me? What is going on that I am attracting strange animals into my yard? Because when I got up from my desk I stared straight into the face of a 150-pound white Australian Shepherd. IN MY FENCED-IN BACKYARD. I did not know Australian Shepherds could be that large, so initially I thought it was a wolf. A wolf with a collar and tags. Just standing there delivering the message: “WINTER IS COMING.”

I could not calm Coco down, so I took her and Chuck by the collar and guided them back to the storage room to their crates. When I came back to the office that dog… can you call an animal that large a dog? At some point don’t they cross over into HORSE territory? That dire wolf was still standing there looking at me through the glass door. I made a “shoo!” gesture with my hands, but it just blinked. Shoo? SHOO? You don’t SHOO a dire wolf, HEATHER. You swing a flaming torch at its head while shouting, “Lord of the Seven Kingdoms and Protector of the Realm!”

What to do, what to do. Okay. Australian Shepherds. Mine is miniature and crazy, yes, but the breed is known for being friendly, right? So I stepped outside, barefoot, in my pajamas, baby kangaroos on my brain, and tried to figure out how the damn thing got into my backyard. It backed away several feet when I opened the door, but then turned to face me. And then it crouched down. For those of you who are unfamiliar with canine behavior, this particular stance does not mean “come give me cuddles.”

That’s when I froze. I didn’t want to make any sort of movement that it might perceive as threatening. Death by Ferocious Mauling is not on my life list.

Since I had its undivided attention I wildly darted my eyes to the left to suggest that since it probably came from that direction, maybe it should head back that way. Go ahead. Think I’m nuts. Think, why is she standing outside in her pajamas sending signals to a menacing animal WITH HER EYEBALLS. Worse things have been said and thought and written about me. Let’s start with: “Whenever I see her pointy chin I want to smash my monitor with an axe.” See. Darting Eyeball Lady isn’t so bad.

Plus? It worked! The dog crouched a bit lower and then jumped into a full-on sprint right past me, growling and baring its teeth the entire time. I watched it run the length of the backyard and around the side of the house. By the time I got close enough to peer along the narrow passage at the side of the house it had disappeared, either magically or by jumping a six-foot tall brick wall. My vote? Aliens got it.

I’m taking bets on what shows up next.