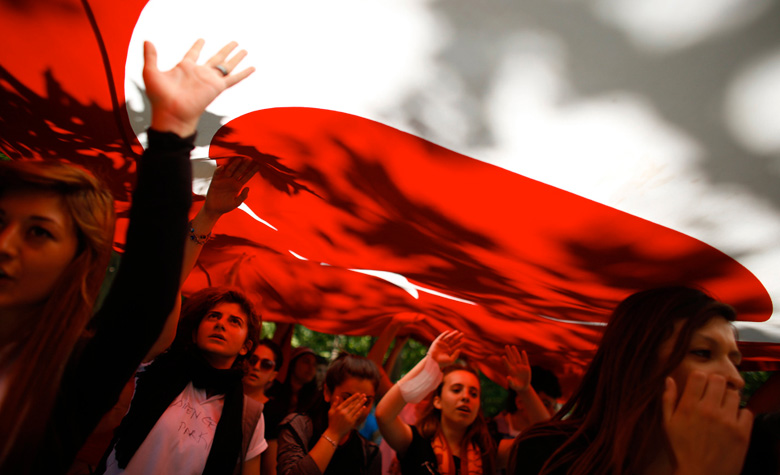 – The Big Picture: Protests in Turkey

– The following is a compilation of what those folks got into in about 5 hours with the [photo] booth… Oh, and we had 11 kegs of beer to fuel the mayhem: Slo-mo Booth Supercut

– The former singer for Freshkills talks about playing in a band no one likes:

Look, there are millions of musicians who will swear to their dying day that they make music for its own sake, and the joy of creation is what it’s all about and if you’re in it for any other reason you are a poseur and a fraud… To them I say, “Cool.” They aren’t wrong.  But they’re just better humans than I and therefore outside of my purview. I wanted to be successful. Not rock star successful, but successful enough that I’d be tending bar six months out of the year instead of twelve.

– You gonna wanna watch this: “And peoples know this?”

– This is going to be my reaction from now on whenever anything goes dramatically wrong: Star Spangled Banner Cymbal Fail

– The pros and cons of being tall

– As if it could not get any nerdier: a cappella cover of the Game of Thrones theme

– The Ruins of Normandy: Unpublished Color Photos from France, 1944

– A Month Without a Fork

– Samuel Beckett Used to Drive André the Giant to School, All They Talked About Was Cricket

– The Pace of Productivity and How to Master Your Creative Routine:

– “Bill and John have been together for 54 years. Their story shows clearly why the freedom to marry matters to gay and lesbian couples.”

Sorry just got your text. Do you still need to go to the hospital?

I want my hearse to have ‘JUST DIED’ written on the windshield with cans tied to the rear bumper.

If you don’t have anything nice to say, write it under some Youtube videos.

My 4 year old and I are having an argument.I’m telling him that he is making me late for work and he’s telling me that he is Batman.

If you’re wearing khaki above the waist I’m going to assume you know everything about every animal.

Just ate a sandwich that was so bad I threw it away angrily and told passersby “It knows what it did.”

You had a great time in the park with your kite that looks like a hawk but 6 mice died of heart attacks.