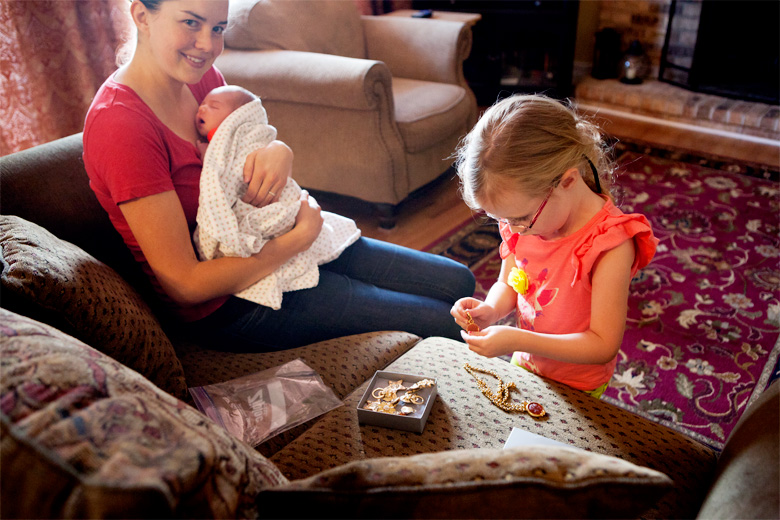 Saturday morning I drove the girls down to my mother’s house so that all of us including my stepfather could head down in one car to see my cousin’s baby. I had told my cousin that I would text her when I got to my mother’s house to see if she was still up for a visit because I remember what it was like during those very early days of having a brand new baby. You remember, too, don’t you. One morning you realize you haven’t changed out of your pajamas in four days, and then an hour later you’re so high from having successfully showered that you’d gladly host the Olympics in your living room.

And then if anyone goes, dude, calm down, you’re not going to host the Olympics, okay? You’re like, I just washed my hair. Organizing an event that size could not possibly be any harder. Someone get me the president on the phone NOW.

She responded to my text that she’d need a little time to clean up a bit, and right then my mother noticed the bracelet I was wearing on my arm:

Which reminds me… the family who bought the old house found a rattlesnake in the backyard. This one:

Tyrant says it looks just like the one he and Marlo saw. Maybe, and this just a theory, but I’m thinking he returned because he missed Marlo’s lisp.

My mom expressed surprise at the idea that I’d wear something so “fancy” although this is about as fancy as I get these days when it comes to jewelry. I go through phases and the one I’m in now is no earrings, no necklaces, and very minimal bracelets, not exactly what you’d expect from the daughter of the Avon World Sales Leader. You hear about my mom and what she’s accomplished and the fact that she won’t walk to the mailbox without being dressed in a suit, and you’re like, I bet every inch of her daughter’s skin is covered in rhinestones.

She said she had a vintage bracelet somewhat similar to what I was wearing and if I was interested in it she’d let me have it. And then… and then… no wonder my kids hold my mother in higher regard than Santa Claus and Jesus and even Batman for that matter.

Yeah. My mom and her collection of Avon jewelry. And her willingness to let my kids TAKE IT HOME. I cannot compete with this. Unless something horrible happens to Disneyland and I can make my kids believe it was all my mother’s fault.

Marlo modeled a pair of clip-on earrings for my cousin:

I wish I had been taking video because right here she’s saying, “Do you see thisth? DO YOU? Becausth I am STHTYLISTHH!” Although it does kinda look like she’s singing, “Errbody get up!”