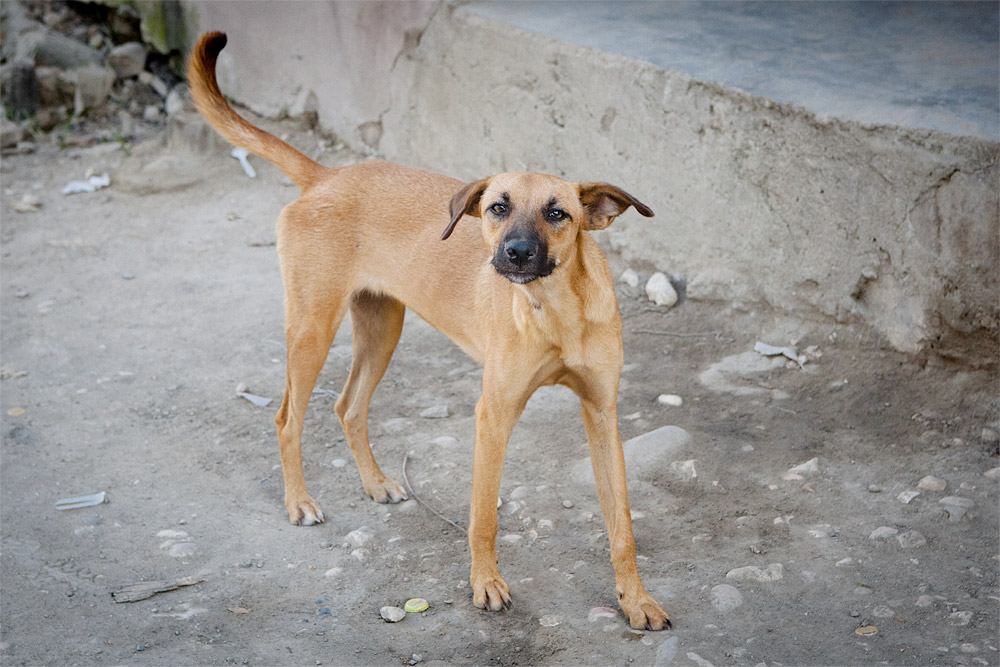 Chuck’s trainer in Los Angeles once told me that if you combined the DNA from every kind of dog in the world that it would end up looking exactly like him. He is every dog filtered down into its most common parts. The Super Mutt.

Having been to Bangladesh and Mexico, I knew that I’d see stray dogs in Haiti and had been warned by the woman at the local travel clinic here that under no circumstances should I touch any of them. She said I could get a rabies vaccination or, you know, RESIST CUDDLING THE DOGS. I put that in all caps because I had said, “You mean I can’t even rub their bellies?” Look at this dog’s ears. They yearn to be nuzzled. Just a tiny bit? No? WHY? LET ME PUT HIM IN MY PURSE AND CARRY HIM AROUND. NO ONE WILL THINK I’M CRAZY.

There were stray dogs everywhere, roaming the streets and weaving their way in and out of buildings and shops. Almost every single one looked something like this, something very similar to Chuck. I showed pictures of Chuck to everyone in our group and throughout the week they became convinced that I had traveled to Haiti before, kidnapped Chuck, and smuggled him home. The likeness is just too uncanny.

Toward the end of the week a couple of women couldn’t resist an adorable mutt who was wandering around the restaurant in our hotel, and they gave in and pet him for several minutes. I exchanged glances with our security guard, a local who is hired to accompany groups like ours, and simultaneously we said to each other, “Fleas.”

The lady at the travel clinic is going to be so proud of my restraint.