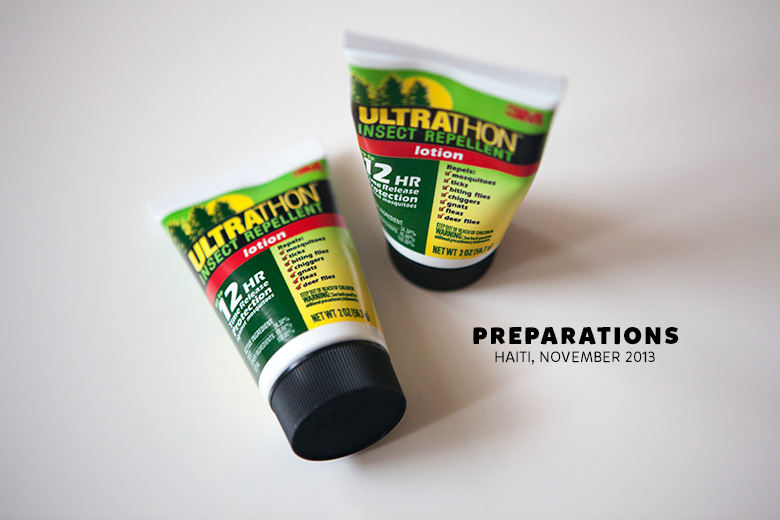 Very early Friday morning I returned from Haiti via New York, a 16-hour day of travel door to door. The previous morning I had picked up a small bug and subsequently spent almost all of that traveling time locked inside the bathroom either at various airports or on the plane. You didn’t think I could take a blog post about Haiti and make the focus of it poop, did you? But it is totally happening. It’s unfolding in front of your eyes right now. How dare I? Have I no decency? You already knew I was tacky, but this? Not poop, Heather. Not poop.

(Psst. This isn’t a post about Haiti. That’s coming later on. This? This one’s about the precautions the travel clinic told me I needed to take and why I did or did not heed their advice as some of you have asked about specific preparations. A lot of this applies to travel to many foreign equatorial countries, in case you’re headed some place in the same region. Like, say, Canada.)

I’m not really going to recommend traveling if you have a bad case of diarrhea. Sorry. I’d really like to, but I can’t. If you wake up one morning and find yourself running to the toilet, you’re probably going to want to stay close to home, okay? Maybe crawl back into bed? Snuggle your stuffed bunny? Don’t go stand in a three-hour security line and then get into a very confined space where people are sneezing and coughing and sitting next to you drinking tomato juice. Also, tomato juice? You’re given the choice of Coke or Sprite or BEER and you choose tomato juice? Please give up your seat for someone who deserves TO FLY. IN THE AIR. LIKE AN EAGLE.

If you must head to he airport go grab some Imodium or some Pepto and something to wipe the continual stream of sweat that will coat your forehead for the next 24 hours. I’d filled a prescription for Cipro before I left in case I developed the fabled traveler’s diarrhea (you have got to love that traveler’s diarrhea has its own Wikipedia page), but the over-the-counter meds were keeping me somewhat (emphasis on SOMEWHAT) stable. Several members of our group had earlier in the week bemoaned the side effects of Cipro and, yeah… let’s take a look at a few of those:

(Oh, you mean it causes anxiety? Because I need some more of that.)

– sudden pain, snapping or popping sound, bruising, swelling, tenderness, stiffness, or loss of movement in any of your joints;

(Snapping? Popping? WHERE IS THE CRACKLE?)

(I thought this was Cipro, not a cult.)

– numbness, tingling, or unusual pain anywhere in your body;

(Right. This had to be the one the lawyer threw in so that their asses would be totally covered if anyone experienced any kind of pain whatsoever anywhere even if it was totally unrelated. You took Cipro and got a toothache? WE WARNED YOU.)

And then there’s this one:

– severe skin reaction — fever, sore throat, swelling in your face or tongue, burning in your eyes, skin pain, followed by a red or purple skin rash that spreads (especially in the face or upper body) and causes blistering and peeling

(So, basically… molting? Cipro turns you into a snake?)

Hoooookayy. I had just gotten through the second of two security lines in Port-Au-Prince when I had an internal debate about which scenario would be worse. How long would the Cipro take to work, and even if it did, what if any of those side effects would manifest while it did so? Someone had regaled me with the lovely story of traveling to Ghana and developing a case of diarrhea that Cipro had only made ten times worse. Why yes, this did just turn into a medical website. Diagnosis: we all die.

In the end I stuck with Imodium because I don’t really have an ambition to transform into a reptile. I am happy with my decision.

Before leaving I also got a hep A vaccination and a typhoid vaccination. I declined the hep B vaccination (wasn’t planning on getting a tattoo or having wild, unprotected sex with strangers while visiting maternal health facilities), the tetanus shot (I’d had one within the last few years), the rabies vaccination (agreed not to snuggle with dogs), and the flu shot (I have no reasonable explanation for this other than I don’t ever get a flu shot which just told the Universe to send me the flu wrapped in a giant pink bow). I DID fill a prescription for malaria medication. There is some back and forth about malaria medication in the comments on one of my Instagram photos, and my experience is this: I don’t think I’d enjoy contracting malaria.

I have now taken both forms of malaria medication (one you take every day while traveling in the foreign destination [the kind I took when I went to Bangladesh], the other you take once a week and continue to take for a few weeks when you return home). I haven’t experienced side effects with either medication. Your mileage may vary, but again. You weigh your options, right? Or have a medical professional weigh them for you. If you google malaria and read even one or two sentences, you might be just like me and think these thoughts: “I do not want that. No, I do not.”

Okay. So. DEET has its own possible set of side effects: seizures, rashes, insomnia, and mood disturbances to name a few (THOSE FEW ARE PLENTY, THANK YOU VERY MUCH). But I should probably mention here that there is something about me specifically that mosquitos cannot resist (my personality? my charisma? because I pay them?). The first early morning in Haiti as we all gathered for a quick outdoor breakfast, someone mentioned that they were worried they hadn’t packed enough bug spray. I was like, do not worry! You are in luck! Because you happen to be traveling with the piñata at the mosquito party!

The mosquitos will show up, realize that I am sitting RIGHT HERE OH MY GOD IS IT THEIR LUCKY DAY OR WHAT, and they will ignore you to the point that you will take it personally.

I expected to get eaten alive. I always do. If I am in an area prone to bugs, half of the mosquito population will go home drunk on Armstrong blood. This, however, is the first time I have ever used a bug repellent that works (MAYBE BECAUSE IT’S DEET, HEATHER), but what’s even better is that it lasted 12 hours. Everyone else was using a formulation that they had to reapply every few hours, but I’d put it on in the morning and not even think about it all day. We did spend a couple of days in a lower altitude, more mosquito-prone part of the country and I noticed that the bugs found the two fingers where I had accidentally wiped off the lotion and those fingers looked like they had grown tomatoes. Which just shows you how well it works when you use it the right way.

AHEM: do NOT under any circumstances doubt the heartiness of equatorial mosquitos. Tyrant had recommended I use an organic bug spray he found at Whole Foods that might be fine for the mosquitos in Utah (mosquitos across the world are laughing that I just typed “mosquitos in Utah”) but then I got a frantic text message from my friend Kristen pointing me to this:

It’s fun looking at your daughter’s legs and thinking about how your commitment to avoiding chemicals on a trip to Haiti has come at the expense of her poor, welted skin.

So glad I listened to Kristen. So glad. And you should, too. Listen to Kristen. And to your travel clinic. Or someone who knows what they are talking about.