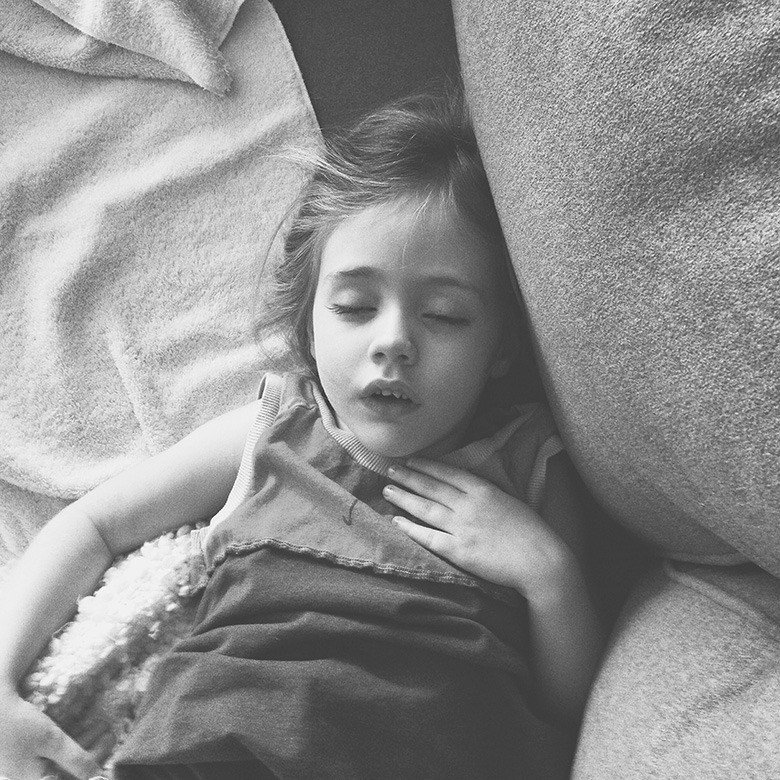 Yet again both of my children had some sort of bug over the weekend, Leta’s much less severe than Marlo’s, so we spent our entire Saturday huddled in the living room next to a puke bowl. Marlo is a strange patient, which is neither good nor bad, just odd. She’ll writhe and move endlessly, thumping her leg or foot to distract her from pain and then fall limp and completely still for hours on end. She was moaning about her tummy, turning over and then climbing into and out of my arms when suddenly she passed out. Mid-moan. Just, boom. Her legs were draped over my lap and I texted my mom, “Mid-yelling that her tummy hurts Marlo fell asleep. I’d check her breathing but she’s snoring. And loudly chewing on air.”

Earlier she had complained of having a “horrible hat nake.” When I asked if she meant a headache she got very frustrated that I was more concerned with WORDS than ILLNESS and yelled, “YES! I HAVE A HORRIBLE HEADACHE NECK!”

Leta and I were nice enough to check on each other’s headache necks for the rest of the day.

“It’s a lot better than when it was a hat nake,” I’d answer. “If it turns into a nat hake headneck I’ll let you know.”

(This reminds me: Marlo loves having “pall nellish” on her toenails. Please do not correct her. I’d like this one to stick around for awhile.)

That was the last thing Marlo would say for over six hours which is yet another one of her weird traits when she’s sick. She’ll go hours without talking. This is a mixed blessing. Listening to a child give a running (and usually wailing) commentary on every ache in their body can be challenging, kind of like standing right next to a car alarm that cannot be shut off. But as a parent this is something you signed up for. When you lose your hearing the doctor is going to look at your chart and say, “It says here you willingly went off of birth control so, I’m sorry, I legally cannot treat you.”

Marlo’s silence, however, can be just as difficult because I have to guess what’s going on. Where is she hurting? No answer. Is she hungry? No answer. Thirsty? No answer. Does she want me to rub her tummy? Complete silence. So in our ongoing quest to be the most kind and sensitive caregivers, Leta and I regarded this as a challenge: who could get her to talk first.

Let me back up a second and relate a breakfast conversation we had last week:

Leta: “Mom, I really want a mermaid barbie for Christmas.”

Me: “I know. It’s at the top of your list in all capital letters. You make me proud.”

Leta: “Marlo, what do you want for Christmas?”

Leta: “But you already have, like, all the stuffed puppies in the world.”

Me: “Leta, how do we break it to her gently that Christmas morning is going to suck?”

Marlo refuses to add anything to her list. She wants puppies. And I should have thought about that conversation when trying to break her silence but, of course, I tried the old favorites BUTT and FART and BOOGER. Leta tried asking her about school and friends with no success either. We were about to give up when Leta asked, “Do you want real or stuffed puppies for Christmas?”

Marlo didn’t say anything, she just shot Leta the most wicked WE HAVE BEEN OVER THIS HOW MANY TIMES glare and actual lasers came out of her eyes. Physical recognition. It wasn’t verbal, but Marlo responded! Leta won.

It wasn’t until after a Marlo vomited two tons of bile that she actually said anything. And yet again another chapter from The Glaring Differences Between My Two Children: Marlo’s head was hovering over the bowl, yellow bile shooting out of her mouth and nose while Leta stood two feet away SCREAMING HER HEAD OFF. The whole ordeal was far more terrifying for Leta which, yeah. I can understand. No one likes that scene in The Exorcist.

But after I wiped Marlo’s mouth clean and nestled her comfortably back onto the couch, she blinked a couple of times and then held her finger in the air to indicate that Her Highness would be taking the time to make an announcement.

“Mom,” she said calmly. “That tasted like barf water.”

How does one know what barf water tastes like, I wonder.

“It did?” I asked almost coming apart at the seams with jubilation. SHE SPOKE! SHE SPOKE! And the first word out of her mouth was MOM and not PUPPY or DORA or BIEBER.

She did. A lot. And I promised her that when she was feeling better we’d celebrate with some pall nellish.