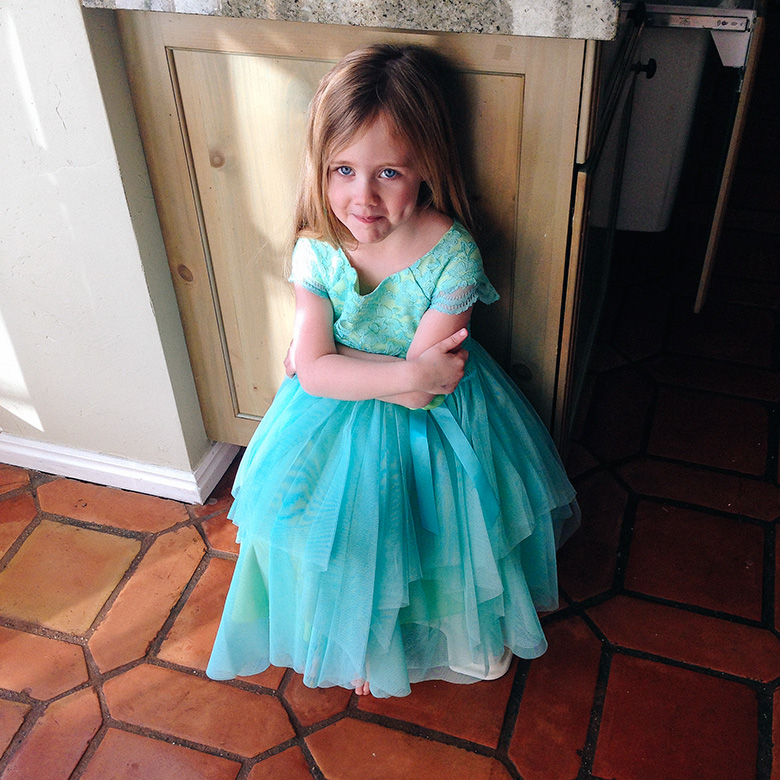 The girls’ spring break officially began on Friday afternoon, and to kick things off I let Marlo change out of her regular clothes into the bathing suit I bought her at Costco for eleven bucks. Then we all did tequila shots and took selfies with our tongues out while making gang signs with our hands. The house is totally trashed. I found Tyrant passed out in our tub. He was lying there in a puddle of vomit and had a several four-letter words scrawled across his forehead.

It wasn’t really bathing suit weather, but I was glad that Marlo would be staying in that one outfit for the rest of the day and not in and out of fourteen different dresses that I’d find discarded around the house. Our afternoons go like this:

“Marlo, a minute ago you were wearing a different dress. Why did you change?”

“Because I needed a different dress.”

“Why did you need a different dress?”

“Because I was done with that dress.”

“You were done with that dress?”

“Yes. My arms and legs got very long. And I grew out of it. And I needed a bigger one. This one is bigger.”

I don’t necessarily think she’s trying to lie, she’a just got a very robust imagination.This morning she said to me, “Mom, I am a vampire. In real life. For real. This is why you need to give me red Gatorade.”

After we finished dinner, Marlo began rearranging everything on the bookshelf in the living room while Leta and I sat side-by-side on the couch to watch one of her shows. Her shows star teen actors and invariably include a laugh track, something that seems so vintage to me now, so vintage and so terribly annoying. I realized I don’t watch shows that include laugh tracks anymore and that absence has now made it so that when I hear one I feel like owning a gun for the sole purpose of destroying a TV might justify the Second Amendment.

About ten minutes into the show a mysterious zap shot across the room and all of the electricity went out. Boom. All the lights turned off and the television went dark. Leta sat up abruptly.

“Hey, calm down,” I said. “I did not do anything. I guess the power is out.” I would have liked very much to take credit for killing that laugh track, but alas.

“THE POWER IS OUT?!” she yelled, panic very clear in her words.

“It’s okay,” I started to explain. “It’s not a big deal. I’ll go check with the neighbors to make sure it doesn’t have anything to do with our house.”

“WHAT DO YOU MEAN?! IS IT OUT ALL OVER THE CITY?! IS UTAH OUT OF POWER? IS IT GOING TO GET REALLY, REALLY DARK?”

“Hey, listen. This happens all the time in various places. Let’s go see if it’s out next door.”

Marlo was watching this conversation and paying very close attention. And then she squealed.

“It’s going to get really, really dark! So dark that we can’t see! I LOVE it when we can’t see!” She probably couldn’t have spoken three more unsettling sentences to Leta.

“Leta,” I said trying to be patient. “It’s going to be fine. We have flashlights and a ton of candles if we need them.”

“CANDLES?!” Marlo screeched. She leaned over, put her hands on her bare legs to push her body as high as she could jump. “WE CAN HAVE A CANDLE PARTY!”

A candle party in our bathing suits on a Friday night. Wait until you see the Pinterest board for this shit.

I grabbed my phone to take it outside with me just in case I’d need to call the power company and report the outage. That’s when I realized that my battery power was down to 29%. Cue the heart attack. Listen, we all have our things. Some people get freaked out by snakes. Some people, like my older child, get freaked out by the dark. I am a person who gets freaked out when the battery life on my phone drops below 80%. Which is why if you are sitting next to one of the few power outlets at the airport and are not using it I am legally allowed to pee in your coffee.

When I stepped outside I noticed several neighbors already in their driveways checking with each other about the power. I waved to one across the street, and she yelled, “You guys, too?”

I nodded and then dialed the power company. After weaving through a maze of “press this” and “say this” and “sign over your first-born child” I got to a human who checked the grid and confirmed the outage affecting about 140 customers in my area. Estimated time it would be restored? 2 AM. I failed to realize that Leta was dissecting every line of my face, every word coming out of my mouth, and when I heard that it wouldn’t be restored until the middle of the night I laughed and said, “I guess we’ll have a candle party!”

“MOM! she screamed. “I do NOT want to have a candle party!” Well, okay. Fine. I will send back the Oompa Loompa. To comfort her I told her she could sleep with me that night. In my pitch black room. Where we’d be unable to see a thing. In the dark. Where there is no light.

Just then my phone died. It croaked. It fell over and stopped breathing. UGHHH! I DO NOT WANT A CANDLE PARTY EITHER! I had to remain calm to keep Leta from hyperventilating and come up with some sort of plan as I do not own a clock other than the one on my phone and Marlo needed to get to bed soon. I headed to the garage so that I could plug my phone into the charger in the car. It took me a minute to figure out how to open the garage door manually, and as I was bending over to lift it Leta slammed her hands on her hips and then threw them in the air.

“THIS IS CRAZY! Why are you messing with the garage door? WHAT IS GOING ON?”

I managed to lift the door over my head and then I turned around and said, “We’re going to change into our swimsuits and burn some candles, but first I need to charge my phone. Priorities.”

Marlo thought that reading her bedtime stories by candlelight was the most magnificent thing that has ever happened to her. She wanted to keep the candles burning next to her bed, but I do enjoy being alive. Request denied. So I convinced her to pretend that her battery-powered nightlight

was a candle. And yes, of course I let her sleep in her swimsuit. I’m not a monster.

Leta was by my side the entire time, and when we returned to the garage the battery on my phone had reached 20%. It was charging, yes, but charging slowly. I wanted to text friends and family to let them know what was going on in case they needed to reach me in the middle of the night, so Leta and I sat in the car together, two worriers keeping each other company on a Friday night in a dark and dusty garage.

That may not seem to you to be a worthwhile memory, but knowing that she felt safe with me, that she leaned over and wrapped her arms around my shoulder and stayed that way for over a half hour, that I could feel the rise and fall of her breathing as she nestled even closer with her tiny body, this is exactly the kind of moment I hoped to share with my kids when I thought about becoming a parent.

I am so glad the lights went out. And when they came back on much earlier than expected, I still let her sleep in my bed.