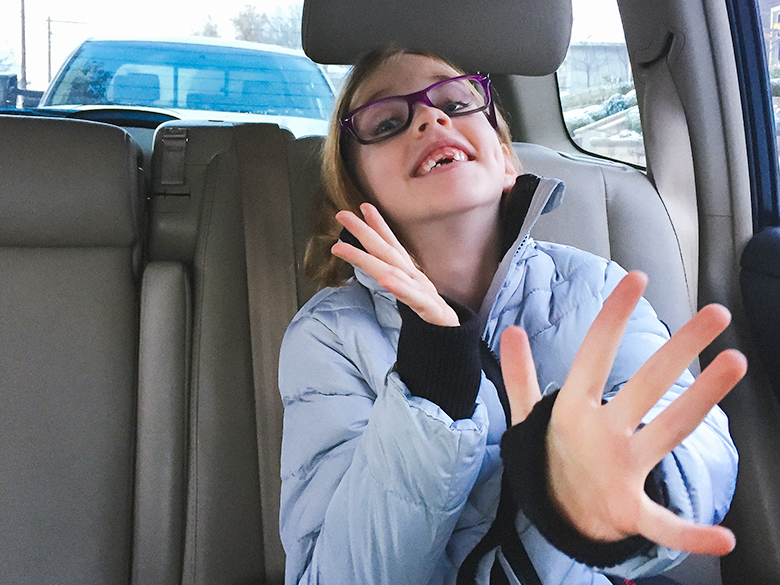 Me: “What do you want for Christmas?”

Marlo: “If I can’t have that then I want a poop emoji pillow.”

How else am I supposed to start off a post when I haven’t written anything here since July? No other way, THAT’S HOW. The country elected what is essentially the equivalent of an anthropomorphized Dorito who got a raging case of diarrhea while standing in line at Arby’s (“We Have The Meats™”), and I am over here talking about the poop emoji. Have you missed me? Because I’ve missed you. Let the handwringing begin, because there are tangents ahoy.

Let’s start here: although Leta has adjusted to middle school with very few hiccups, the dueling schedules and after-school activities for both girls have sent my life into a tailspin. All three of us hit the ground running in the morning and don’t stop until bedtime when we read the last word of the book with the dragon and the girl and that one page where the color of the sky looks like a forest fire. Is Marlo still reading books with pictures? In second grade? Yep. Sometimes she does. And if that is a cause of concern for you, I have a very itchy index finger that’s ready to poke you in the butt.

Both girls are now taking piano lessons, and dear god. I could easily give up on the whole thing and life would be a shit ton easier. I posted this to twitter a few weeks ago:

In case you were wondering what it's like to help a 7yr-old practice piano: https://t.co/VRhKnC2il3

There could not be a more accurate representation of what it’s like when Marlo and I sit down to begin practicing each week’s new lesson. She literally bangs her head on the keys of the piano and splays out her arms like a fly that’s been swatted against a wall, a display of frustration so theatrically violent that you’d think I had just asked her to fix mama a hot dog.

She wants to be good at it immediately, without practice. She doesn’t understand that Leta can play the pieces she plays because she’s been practicing piano for over five years. So I sit with her, and I rub the indentations made by C sharp and D sharp out of her forehead, and we get through the four-page lesson. Note by note by note. By note by note. That usually takes about 20 minutes, and that may not seem like a long time to you, but YOU WOULD BE WRONG. I have to remain calm and keep my cool for an excruciatingly eternal 20 minutes as she groans and wails and attempts to break antique ivory piano keys with her face.

Some of you are like, well, why the fuck are you torturing not only her but yourself? YOU HAVE A GOOD POINT.

However. After enduring that 20-minute bloodbath she and I get to take a break wherein she goes off to watch a video about Minecraft and I go sit in my closet and sniff glue. Leta practices for an hour every day in two 30-minute chunks. Her teacher suggested this a couple of years ago, to split up the time into manageable segments because kids are kids and you know what kids are good at? Hating everything about life and blaming you for it. Where was I going with this.

Right. Marlo practices for 30 minutes a day in two 15-minute chunks. Except for that first chunk of the week. That first chunk is never less than 20 minutes because, as it turns out, inflicting brain damage on yourself adds an extra five minutes to any activity.

When Marlo and I return to the piano for the second chunk of the day, she’s perfectly fine and rational and happy and this makes me want to rip my own face off. She’s now familiar with the notes, making less mistakes, and getting the hang of the lesson WHICH IS THE POINT OF PRACTICING I JUST WANT TO POINT OUT so, you know, look at how good she is at this, mom! She loves it. In fact, she wants to play the most complicated song in the lesson one more time because it feels so good to know how to play it. INSERT STRING OF OBSCENITIES HERE.

Of course I want her to feel this way. That’s why I am investing so much time and money into this endeavor.

However. I also feel like I should have the right to inflict some sort of retribution that is equal if not far greater than what she put me through earlier. Like maybe forcing her to listen to 20 straight minutes of someone puking up a bowl of spaghetti that they didn’t chew in the first place. I’d be satisfied with that.

A requirement of working with this particular piano instructor is participation in something called Federation. Twice a year Leta plays in front of judges. In the fall she plays a concerto with her piano teacher, and in spring she plays two solo pieces. It’s hard work. These pieces are never simple or straightforward, especially the concerto. In the three weeks leading up to the performance I walk around the room while she practices to listen and help her work out the parts where she’s having trouble. This consumes anywhere from an hour to 90 minutes of our night. Every night.

Some of your are like, well, is she going to grow up and play piano for a living? Why the hell are you not using that time to relax on the couch with a beer and a giant bowl of Franken Berry? ANOTHER GOOD POINT. Sit down for a second and stop being right, JUDY.

However. Have you heard how this kid can play?

Hard work fucking pays off is why I am not sitting on that couch belching out the alphabet after chugging a sixer of Pabst.

Last night she played her piece at the recital her teacher hosts for all the students and families of students in advance of the judging on Saturday, and earlier this week I realized in the middle of my workday that she didn’t have any tights to wear with a dress because we don’t ever do things that require putting on such awful things as dresses and tights and uncomfortable shoes that you can’t wait to take off from the moment you put it all on why yes indeed I did say all of this without taking a breath oh my god. You guys. Wait. The Grinch does not wear pants. I am turning into the Grinch. Please don’t attempt to stop this from happening or deny me this natural metamorphosis.

There was no possible way in the tangle of work and deadlines and homework and after school activities that I’d be able to find a pair of tights for my growing, gangly 12-year-old piano player in time for the recital, so I called my mom and did that which I hate most in life: I asked for help. There’s a whole episode of my podcast dedicated to talking about how much I can’t stand doing this, how the instinct to scream, “Help!” when in a crisis has transformed into, “It’s much more convenient for everyone if I just curl up and die.”

My mother showed up to my house last night not only with a pair of tights for Leta, but also a pair of tights for 20-Minute Bloodbath Head Banger Don. Since Marlo only started piano a couple of months ago, she’s not playing in front of judges. But Leta was getting dressed up, so she wanted to get dressed up and next thing you know we all look like we’re about to attend sacrament meeting on Sunday morning and actively deny the LGBT community their civil rights.

You’ve missed me, haven’t you?

Leta slayed her piece at the recital, blah blah blah, that’s not what this is about. You didn’t come here to read a heartwarming story about what it means to invest in your child’s talent and future and sense of self, no! What you came here for is what happened after the recital as we were clambering inside the house trying to duck out of the first snow storm of the season. Which, you’ll notice, I haven’t complained about yet. And this worries me. Because if I’m trying to turn into the Grinch, I’m doing a shit poor job and what kind of example is that setting for my kids?

Marlo was the first inside the garage door where we all discard our shoes, and when she leaned down to yank hers off she paused, stared for several seconds at a place on her leg and said in a sing-song voice, “I’ve got hair on my tights!”

Leta and I were directly behind her and, as it turns out, we both heard her say something completely different than that. Leta shot me a look and I shot her a look that confirmed, yes, she should ask her sister to repeat herself.

“You’ve got what?” Leta asked her sister.

“I’ve got hair on my tights!” Marlo said once again.

Leta looked at me and I knew that she knew that we had both heard Marlo drop the G and the H from that last word. Twice.

Which is more than once.

Plenty of times, in fact.

I played that mind game I played during Marlo’s birth where I wrinkled up all the pain and agony of a contraction and stuck it into a quadrant of my brain that would enable me to survive the next couple of minutes. Except I was wrinkling up laughter, and turns out laughter isn’t as cooperative as pain! Laughter does not negotiate, accept bribes, or agree to be a contestant on a reality show just to make friends.

In an attempt to find a way outside of my body that laughter found a nostril, and a giant string of snot that must have been hiding inside my sinus cavity waiting for this exact moment suddenly shot out of my head. Must have looked like a caterpillar who was late to get his cocoon set up so he borrowed a friend’s Adderall.

Luckily I could then play off that laughter by the fact that I had just blown my nose without my hands or a receptacle—because you know what? If my aim in life is to live pants-less in a wintery cave by myself? Fuck tissue.

Ha! Hahaha! “They.” Because you’re never really talking about just one.

Anyway, the future is female.