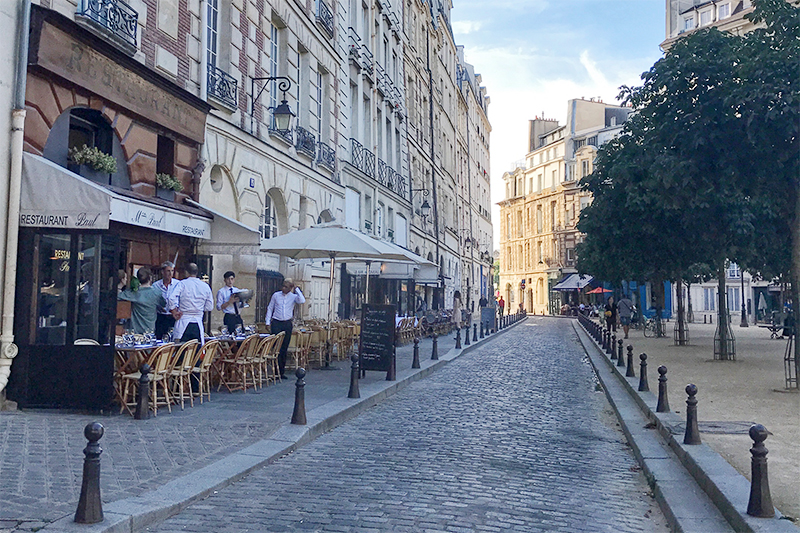 When people found out that I was going to be spending three weeks in Paris, the reactions broke into two distinct camps. People were either, “Oh my god, what are you thinking? I’d get bored after four days! You’re going to want to go home after a single week!” Don’t worry. I punched all of those people straight in the balls on behalf of the rest of us. If any of them fell to the ground in pain I’d say, “I’m sorry, I’d help you stand up, but I may get bored while reaching out my hand. Not risking that scenario!”

The other camp was like DUDE. Are you fucking kidding me? Can I come? No, seriously. Take me with you. I can fold myself up in a tiny ball. I’ll fit in your carry on and I promise not to be hiding any liquids or make jokes about terrorism.

People had two different visceral reactions, and now that I’ve been here I’ve come up with a theory as to why. First let me say this: I did not have a single moment in my schedule to get excited to go to Paris. Not a single second. People asked me, “Aren’t you really looking forward to your trip?” And I was like, “Which trip? Paris? I’m going to Paris? When? What idiot made that decision? Won’t I get bored?”

Because I got back from Montenegro and a week later the girls and I were on a plane to Austin. When we got back from that trip I had to throw Marlo a birthday party and meet two deadlines before I left seven days later for a trip to Aspen for a conference. While there I attended a few days of intense panels and networking events, and when my plane home got canceled—just flat-out redlined, like, the woman working the United desk was YOU WILL NEVER GET HOME ASSHOLES—I rented a car and drove seven hours from Aspen to Salt Lake City. You want to know what a woman who loathes driving more than any other activity in life loves to do? Spontaneous road trips by herself! Through treacherous mountain passes in the dark so that she has to white knuckle it three-fourths of the way! Makes me wet just thinking about it!

I then had two days—TWO MOTHER TO THE EFFER EFFING DAYS—to meet a deadline and get my kids ready for New York. Give it up to the Avon World Sales Leader who got Leta ready for camp, an activity that could be a full-time job for a professional event planner. Except any professional event planner would look at the job description and go, “Are you out of your goddamn mind? I am not qualified to do this! No one is!”

Ah, my friend. You have never met my mother.

While in New York I had to work on another project, and then I came home to two more deadlines, the Fourth of July, and three days to get everything ready for my departure. I was sitting in the Salt Lake City International Airport downloading translation apps on my phone not even 15 minutes before boarding my flight, that’s how close I cut it. And it was then, 15 minutes before getting on a plane to leave my home for three weeks, that I suddenly realized, “Oh shit! Coco! COCO! I hope Coco can let herself out!”

I was walking along a random street the other night after having written for about eight or nine hours during the day—this is why Paris in the summer is perfect for a project like this; it stays light outside until almost 10:30 at night, so I can work during the day and explore for hours and hours and hours at night—when that question came to me like an echo from a past life: “Aren’t you really looking forward to your trip?” I started laughing out loud to myself.

And because I am not trying to cram this city down my throat in less than four days, because I am not mapping out a route each night and making myself meet each point at a specific time, because I am letting it unfold in front of me as I walk past each majestic street, past the miles and miles of sprawling man-made beauty—WAIT. This is another point I need to drive home. This is important. Listen to this part. The rest of this post is just trash.

Someone asked me why I think Paris is so amazing, and I thought about all the walking that I’m doing with no destination in mind, how I can go mile after mile and not once hit a street that looks like something you’d see in the states. It’s like I’m stumbling through a gorgeous, wooded mountainside with waterfalls and rivers and fields of wildflowers, except it’s all man-made. It’s all carved and built out of bricks and stone and iron and wood. Humans made all of this, and to try to comprehend it—the sheer magnitude of it—is like trying to wrap your head around the beginning of time. Each question generates a thousand more questions.

If you were to try to cram this place into four days? You’d walk away exhausted and beaten to near death. You’d say to someone, “Paris? Ugh. I can’t take more than four days.”

I have been here for eight days and I have not even scratched the tiniest edge or pulled back the first layer. And I have walked over 100,000 steps since I got off the plane at Charles de Gualle.

If you have never been here and want to come or have plans to visit, and any of the way that I like to explore a city resonates with you (that part is kind of critical because someone who needs to stick to a schedule would have a heart attack just thinking about wandering around without an agenda) then this is what you need to know, especially if you don’t have time to think about whether or not you are excited to come here:

Buying a house? Stupid and lame in comparison. Promotion at work? I am doing the jerk off motion right now just thinking about it. SPEEEWWWWW! Having a baby? YOUR BABY CAN TOTALLY SUCK A BALL. None of it compares to this place. None of it! This place is going to blow your head right off of your body. And when you try to put your head back on Paris will wait for you, a cigarette lolling gently between it’s middle and forefinger, ask you if you are doing okay—in English because it knows your French is terrible, don’t even try, please, shush, it deals with us all the time and is now used to the fact that we come here not having any clue that a city could possibly be so violently beautiful—and then it will rear its right leg and kick you squarely between the eyes.

P.S. It’s happening. I’m dreaming in French. Really terrible, broken french. And my verbs are all wrong, I’m sure. But I woke up this morning mumbling, “Lasissez the bon temps rouler.” I know. Roll your eyes. At least I didn’t sit up straight and shout, “RATATOUILLE!”

P.P.S. Tomorrow is my birthday and guess where I’ll be? You’ll never guess! PARIS! I will be in Paris on my birthday! And I said this in one of my Instagram photos but it bears repeating: Life, I love living you.