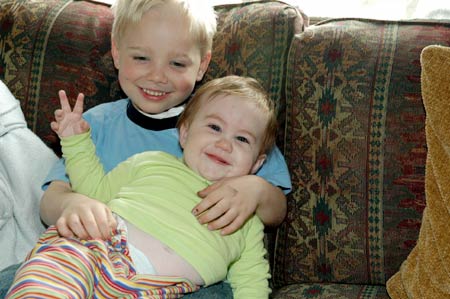 Yesterday Leta and I had a big day full of doctor’s appointments and cheddar cheese goldfish. I had scheduled her physical therapy appointment after her first nap and her nine-month check-up after her second nap because I wanted her to be rested and in good spirits and an all around lovely lady. You can do that as a parent, manipulate your children and ensure that they will be on their best behavior.

You, you who have children can now pick up your jaw after reading that last sentence, because it should be followed by a gigantic, witch-like cackle that goes something like, BWHA HA HA HA HA! YOU AND YOUR LITTLE DOG, TOO! For those of you who don’t have children, the last sentence in the previous paragraph is the biggest bunch of bullshit I have ever spewed on this website. And have I ever spewed the bullshit!

I think Leta may start her period soon, because the last few days have been nothing but bipolar baby. I keep asking her to pick a mood and stick with it, because I feel like I’m dodging bullets. Thank God my meds are working because otherwise I would be locked inside a closet right now on the phone with Jon going, “SHE DOESN’T EVEN FUCKING LOOK LIKE ME,” demanding that he come home right now so that I could get in the car, drive around the block with the windows down, and SCREAM.

But the meds are working, so instead of crawling into the closet with the phone I’m able to say, “Leta, all I did was take away my keys from you so that I could start the car. There is no need for your mouth to droop at the ends like that (SO CUTE, by the way), and for that silent big breath before the storm of tears and screaming. Let’s be civilized.” This never works, of course, and she cries and wails, and can’t understand why in the name of God I would be so audacious as to TAKE SOMETHING AWAY FROM HER. But the best part is, babies have that short attention span thing going on. So once the wailing starts in I can hand her ANOTHER object that has the potential to be taken away but is currently not in the state of being taking away. And BOY does that shut her up.

Yesterday’s physical therapy session lasted 45 minutes, which is a pretty long time for a nine-month-old baby whose normal daily routine is to sit, eat, burp, fart, and sleep. Leta’s therapist, Heidi, worked her hard, and had her sitting in several weight-bearing positions, including one where Leta was sitting on a bench with her feet dangling off into a container of rice. This is supposed to help with sensory issues, and it’s fascinating to watch as Leta leans over and reaches for the rice but then remembers, “My feet are down there and if I lean over I will have to put weight on them and that is just so not necessary.” Last night as we were preparing Leta for bed I found rice in between her toes. And then this morning I found rice in my bra. This is what happens when you have kids.

The good news is that at her nine-month check-up we found out that Leta’s head did indeed grow in the last month. The bad news is that the doctor must have measured her head wrong at the last check-up (the check-up that had him so concerned that he ordered the MRI), that the little chart that illustrates the progress of her head circumference looks like it was drawn by that guy I used to work with who was always so high on pot that HE FORGOT WHICH HAND HE WROTE WITH and used the wrong one.

Her head size is not even on the chart this month it grew so much. This now means that the piano in the dining room has GOT TO GO because there’s just too much mass in this area of the neighborhood, what with Leta’s head in the room, that our house may just turn into one big black hole and suck the entire state into its abyss. Goodbye, Utah! Hello, one less red state!

(here is a photo taken today by Beth wherein she captures Leta’s manic swing in her PMS. She’s loving on her boyfriend, Kyle [four years her senior, gotta start her out early on the older men] and flashing the universal symbol for “DUDE, I’M STONED.”)