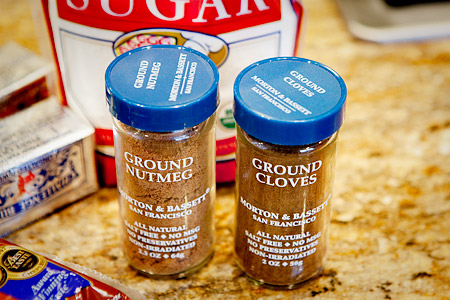 Today’s featured question from the community comes from user aslapintheface:

Which is the perfect segue into what happened over the weekend, starting on Friday afternoon when Jon announced that I would be making gingerbread cookies with Leta the following day, didn’t I know? Hadn’t I heard? Because that’s all she talked about on the ride home from school: gonna bake homemade gingerbread cookies with Mom! HUH? WHAAA? I would have been less surprised if she had said, “I cannot wait until Daddy teaches me about tampons!”

Don’t know if I have ever talked about it here, but I don’t cook or bake or whatever it is you do in the kitchen. I mean, I can boil water, and occasionally I can manage to pull a bag of popcorn out of the microwave without it being attached to three-foot flames, but other than that Jon does all the cooking. In return I do all the, well, the… I can’t really talk about what I do in return because this is a family-friendly website read every morning by my father. So let’s just say that my husband is well compensated.

So who put it in my child’s brain that I could ever bake a cookie? One that you don’t take out of a package and put directly into your mouth? Hello Oreos! The whole snack aisle at the grocery store exists so that you don’t ever have to use an oven, am I right? No? You like to cook? That’s awesome! I’ve got a huge kitchen you can use, and at least three times a day I like to eat. COME OVER.

But who’s not up for a challenge?! At least, that’s what the two cups of coffee told me Saturday morning, and after putting Marlo down for a nap I headed out to gather all the ingredients we’d need for a recipe I found online. And UUGHHHH: THE BAKING AISLE. Do you know how hard I try to avoid that Dark Corridor of Horror whenever I go grocery shopping? All those tiny bottles of spices and powder and self-rising… whatever it is that self-rises. Jesus? Didn’t he self-rise? Is that blasphemous? I’M SORRY. FORGIVE ME, THE GROUND CORIANDER MADE ME DO IT. And oh my God, I guess I wasn’t paying attention, but do you have any idea how much a bottle of spice goes for these days? Like, TWELVE DOLLARS. TWELVE. DOLLARS. Why go through all the trouble of making meth in your basement when you could be out peddling nutmeg? Are kids snorting cinnamon these days? Because some cinnamon drug lord in Sri Lanka is making A KILLING.

So. All ingredients assembled: Doesn’t look like that much, right? I am not even joking, it took me two hours to locate all this stuff in that aisle, and even then I almost got baking soda mixed up with baking powder, AND WHAT A FOOL I WOULD HAVE BEEN THEN.

Marlo is all, fool? THAT DOESN’T EVEN COME CLOSE. And then the first step calls for sifting together the flour and the spices, and I was all sifting? You mean just throwing them in there all together? And Jon, The Cooker, goes, Heather, please tell me you know what sifting means. And I was all, Jon, I graduated valedictorian in high school. CUT ME SOME SLACK. But as a matter of fact, no, I have never sifted anything, that wasn’t on my final English exam. Turns out we don’t have a sifter (THAT IS AN ACTUAL OBJECT, A SIFTER), so we improvised: Also, I guess a tablespoon and a teaspoon are very different things. And so I had to apologize to everyone involved for sticking my hands into that mix to dig out the whole tablespoon of ground cloves I had so casually tossed into the bowl, STOP SHAKING YOUR HEAD, JON. Or as Leta would say, IT’S NOT FUNNY! And would you look at Leta? The saddest little helper in the world. You know she’s thinking, dude, this sucks. And I’m all, I KNOW.

Although, grinding pepper is a total fucking party: And a half a cup of molasses. Which I suggest you keep very far away from your hair. Don’t ask me how I know, ask the scissors I used to CUT IT OUT. Also, I think I may have put an egg in there. I don’t remember, I was busy cutting molasses out of my hair. And then the fun part, or I guess it was fun, if pouring sifted flour into a bowl is your idea of fun. My idea looks more like a huge shot of tequila on the beach, someone rubbing my feet, maybe Johnny Depp brushing my hair. So then we mixed all that stuff for a bit, and then we got to the part in the recipe where it says “let dough chill overnight.” And I’m all WHAAAA? And Jon goes, HEATHER, did you not read the recipe first? And I was all, why would I read it all the way through? Wouldn’t that spoil the ending? Seriously, shouldn’t that have been at the top of the recipe, or couldn’t they have given me a warning? HEY STUPID! THIS RECIPE TAKES TWO DAYS.

Instead we just chilled the dough in the refrigerator for a couple of hours. And during those two hours we searched for a rolling pin that we did not own. Oops. Hello, cylindrical glass vase. God, I am good at this. At least until this part: SPRINKLES! Not very different than SHINGLES! Except maybe a little less painful. And get this. GET THIS. Turns out that this whole “baking with mom” thing was just a gateway to the SPRINKLES! That’s all she wanted to do. She wanted to sprinkle some SPRINKLES! Because she did not eat the cookies, oh no. Not a bite. Why would she? They are not French fries or chicken nuggets. Had I known about the SPRINKLES! part I would have just thrown down a bowl and gone, GO TO TOWN KID! Shake that bottle! SPRINKLE THE SHIT OUT OF IT.

So now we have a dozen uneaten gingerbread cookies sitting in a container on our countertop. I may or may not have sneaked a bite to Marlo.