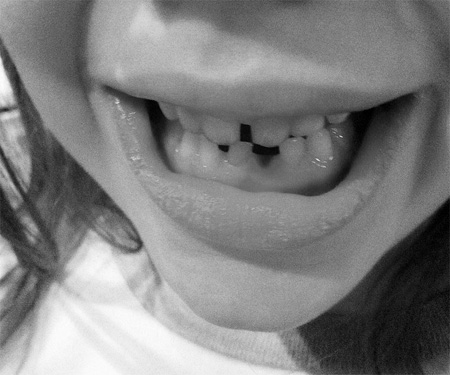 I’m not sure Christmas is going to live up to the celebration that occurred when it happened, not unless we have Cinderella arrive on the back of a flying unicorn carrying a bag stuffed with four tons of chocolate ice cream. And even then that princess had better know how to tap dance.

I know a lot of kids have lost a multitude of teeth by this age, but both Jon and I were late bloomers in every aspect of our lives. I mean, I didn’t get boobs until a bakery in England gave them to me my senior year in college, so technically she’s ahead of her inherited curve!

It was her bottom left front tooth, and it had been loose for what seems like weeks now, slowly inching toward its inevitable demise. We hoped it might just magically fall out. Why not? Nothing with Leta has been easy, not a single thing in her almost seven years on earth, why couldn’t the easy part start now? Eating, sleeping, potty training, drop-offs and pick-ups from school, transitioning between anything… you know, the Mercedes and Porsches of childhood, none of them easy. I was just asking the Universe for an easy tooth! Throw me the yellow Chevy Vega Sedan you’ve had sitting on your lot since 1982, the one that’s missing a passenger side door. I’ll happily ride the shit out of that thing.

No, we had to yank on this tooth, an activity that I would happily turn down if given the choice between that and going through a natural childbirth again, I am not even kidding. There is just something about the tug of a tooth root and the idea of it tearing out of someone else’s gum that makes the food in my stomach want to turn right around and get all impressionistic with the walls.

Eeeeyuuuuuuck. Eww. I know I’m supposed to be grown up about this, but when Jon asked me to feel her tooth to see how loose it was, I was all I TRUST YOUR JUDGMENT. You’re in charge of this one, Jon! You do whatever you feel is right! As long as it involves putting a pillow over my head and letting me hide behind the couch.

How about we tie a string to that tooth, give the other end to Marlo and let nature takes its course?

But I knew I’d regret it if I wasn’t a part of this occasion, so I held her hands (and bit my lip and repeated CALM BLUE OCEAN in my head) as Jon wiggled the tooth back and forth. At first it seemed like it wasn’t time, maybe it needed a few more days to loosen up a bit more. That’s when Jon suggested we search YouTube for some suggestions, and I suddenly popped out of my meditation to cuss in front of my child: Are you out of your goddamn mind?

Do you have any idea what you’re going to find if you google TEETH PULLING? It’s the Internet. We’re not talking about an encyclopedia at the elementary school library where you’ll get some sort of friendly illustration of the tooth fairy. You go ahead and google that phrase and next thing you know your kid is asking why that woman is shooting ping pong balls out of her vagina.

We waited to see if dinner would move things along, and twenty minutes after her usual bedtime we were all on the couch — me, Leta sitting on Jon’s lap, McKenzie there as our cheering squad. Leta winced and grimaced and my dinner danced in my throat as Jon feverishly twisted and pushed and pulled and coaxed. Finally, one last tug… BOOM! A tiny bottom front tooth sat in Jon’s hand. It was over! And Leta ran to the bathroom in disbelief. When I caught up with her she was out of breath, her mouth full of blood. Her breathing was heavy, as if she were on the verge of crying.

“Leta, are you okay?” I asked, worried she was freaking out at the sight of blood.

She didn’t answer me for a few seconds, then finally turned her head to look at me as if my presence had startled her. “What? Me? HAH! I’m totally fine, Mom!” Like, what did you do today, MOM. I just lost a tooth AND I’M STILL STANDING, BRAH.

She gets to be on the tooth chart at school today, in case you didn’t get that from the seven hundred times she mentioned it before going to bed. Also, I was thinking… would it be tacky to collect all her teeth so that eventually I could arrange them in a neat little pattern and then glue them to a mirror like seashells? Because think how many more people would be convinced to have children if they knew they had something like that to look forward to.