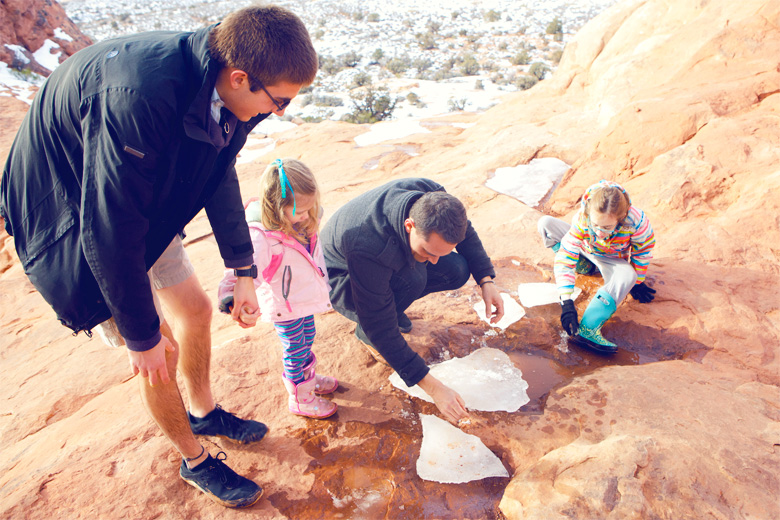 One of Leta’s favorite things to do with my mother other than visit the local thrift shop and come home with a bag of tiny useless things she will promptly lose is “travel” to a local city and stay in a hotel. My mother and stepfather will gather up a few of the grandkids at a time, head to Ogden or Logan, and stay at a hotel for a couple of nights. The kids love the indoor pool, the fast food French fries, and all those times my mother says, “And now we’re going to engage in an activity your parents have strictly forbidden.”

In the weeks leading up to our trip to Arches National Park, we looked at a few options in terms of lodging. And here’s a pro tip if you’re ever headed to that area: look at condos. In Moab they’re almost always cheaper and have better amenities than hotels. Since there were so many of us on this trip, we needed the kitchen and the multiple bathrooms the condo provided. Did we need the enormous hot tub on the back porch? It doesn’t matter if we needed it. We are American. We deserved it.

Unfortunately, no one told Leta that we’d be staying in a luxurious condo as opposed to a cramped hotel room. As she took an initial walk past the kitchen, along the open living room and back into the spacious master bedroom, the mood on her face grew dimmer with each step. After surveying the two-person shower lined with travertine in the master bathroom, she pulled me aside and said she wanted to talk to me.

I didn’t quite understand, not after all the planning that had gone into making the trip as comfortable and fun as possible. She sensed my confusion which only made her more upset.

“There’s no ice machine!” she yelled as she threw herself backwards on my bed. “There’s no Coke machine! There isn’t even an elevator!”

Here’s where I’ll admit that I’d had such an intense week leading up to this trip that the best parenting I could muster was to hold up my index finger to indicate HOLD ON A SECOND and then go get my mother.

“Mom,” I said as calmly as possible when I found her unpacking groceries in the kitchen. “My brain is about to explode and I don’t want to get it all over my daughter. Help.”

She worked her magic, showed Leta the hot tub and then walked two doors down to show her the indoor pool. All while I was googling images of homeless children for the powerpoint presentation I was going to project on the wall next to the giant television.

My goal with this trip was to expose Leta to the terrain of her home state. When I was a kid we’d take trips across Tennessee and I’d witness the flat expanse of the Mississippi Delta gradually transform into rolling hills and walls of exposed rock. I remember thickets of trees so dense that they would swallow sunlight, kudzu devouring freeway overpasses. My childhood is a canopy of humid summers where everything was green and growing into everything around it.

Leta’s will be totally different. Hers will be dry and cracked, dusty and orange. Her horizons are jagged on all sides where mountains cut into the sky. I want to show her the fields of blooming wildflowers in the canyons, the ten-foot base of snow at Brighton Ski resort, the visible layers of sediment across the Uintah Basin. I want to show her a polygamist compound and have her ask, “Isn’t that illegal?”

However, Leta has historically been a reluctant participant when it comes to anything outside of a book. When we traveled to Florida in the summer of 2008 she wouldn’t put her feet in the sand until the last night of the trip. She didn’t touch grass for the first four years of her life. So when I talked to the camera crew who were going to come and film our trip, I mentioned this quirky trait.

“You’re going to notice the personality difference between my daughters almost instantly,” I warned.

“Oh? Is one more outgoing than the other?” they asked.

“Outgoing is not the word I would use,” I explained. “One will become a champion wrestler and the other will write a best-selling book on her sister’s long journey to victory.”

“Which one is which?”

“Leta will most likely want to sit in the car and read a book about Arches. Marlo? Marlo will want to become an arch.”

After spending the night in the luxurious condo with no ice machine, we all had a leisurely breakfast and then made our way to the park. Considering how well the sleeping accommodations had gone over with Leta, I was very nervous that this birthday present to her was going to bomb so badly that it would topple Delicate Arch. But as we started to see formations along the side of the road, Leta suddenly and surprisingly perked up.

“What IS that?” she asked in disbelief pointing to The Three Gossips.

Dane, the resident expert on Everything Outdoor, someone who has been to Arches National Park more times than the Park Guides who give tours, started to give a lengthy explanation. I wanted to seize her excitement so I interrupted.

“THAT is what we came here to see. In a second we’re going to get out of the car, walk up to something that neat and hold it in our hands.”

“That’s much too big to hold with our hands, Mom,” she said. “We’d need, like, a moving truck, or something.”

That’s what I get for trying too hard to sell it.

We chose an area in the park with a few different formations including North Window, South Window, and Turret Arch. Before I could even turn the car off, my daughter who likes to read about experiences rather than experiencing experiences took off up the marked path. Before I knew it she had reached North Window by herself and was staring at the sprawling valley behind it, breathless, her mouth wide open.

Meanwhile, I was following up behind with Marlo who decided to go totally limp halfway up the path. Like, deadweight limp. I had to carry her the rest of the way while she repeated, “Where’sth the bowling?”

We spent over six hours out there running along stone walls, hiking up crooked inclines, and snapping photos of the intense orange backdrop. Yes, it was cold, frigid at times, but Leta didn’t once complain. She didn’t utter a single syllable about wanting to head indoors or wishing she were at Disneyland. Marlo, however, would routinely lie on the wet ground and pretend to be dead.

We took a few breaks for Marlo’s sake, and each time Leta would beg to get back out and explore another formation. Luckily, since there were so many of us there, she didn’t have to take too much down time. Some people may look at this and ask, why does your assistant have to go with you? And why Dane? What is up with that circus? Do they do everything together? Where’s the dancing elephant?

My answer to that is that Dane and Tyrant are like family. They love my kids and my kids love them. Why not have them be a part of this celebration? The more the merrier. When Leta thinks back to this birthday she’ll remember Dane showing her how easy it was to scale that arch, the many stories he told about his previous visits. She’ll remember breaking ice puddles with Tyrant. She’ll remember all of us climbing through Turret Arch together and the fading sun beyond. She’ll remember being surrounded by all that love. I’m not sure there’s a better gift I could give her.