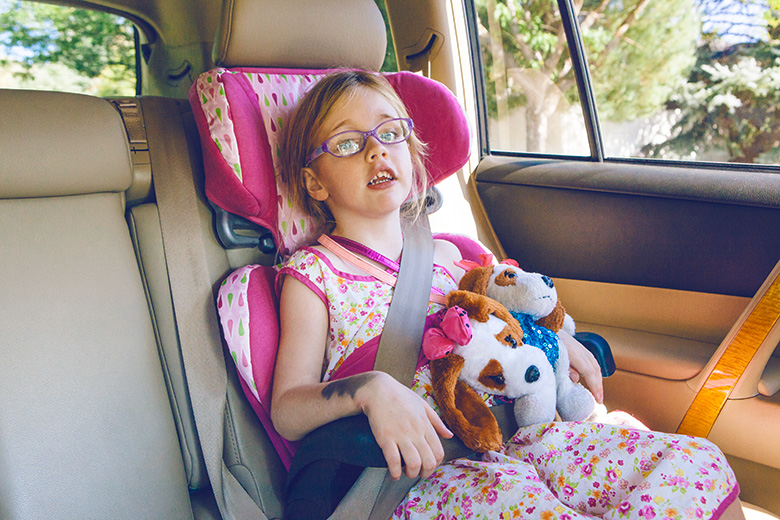 While spending time with my friend Kristen and her family in Southern California, I was reminded of one of the main reasons why she and I connected as colleagues and friends: our parenting styles are very similar, in that we’re both pretty much no nonsense. We don’t bargain, we don’t tolerate rude behavior and we would very much like it if our kids would learn how to fix us a hotdog.

I was also impressed by how little screen time she gives her kids each day and reflected on how much improvement I need to make in that area as a parent. Yes, Leta loves to read, and both kids enjoy imaginary play with each other. They spend a lot of time outside coming up with elaborate games. But when it comes to iPads, televisions and DVRs, I’m guilty of turning to those things a little too quickly to occupy my kids when I need both of my hands for something else. (Like using them to cover my ears.)

It’s especially bad in the car, even on relatively short, 15-minute rides to the store and school. I guess it’s laziness on my part, but laziness sometimes trumps having to listen to, “THIS IS THE LONGEST CAR RIDE EVER” over and over again to a destination that’s only two blocks away.

So I started searching for ideas about games to play in the car with kids. Given that Marlo can’t yet read, I had to skip over some things that required she know how to spot a license plate from Idaho. Although, you really don’t have to be able to read to know if a car is from Idaho. You’d know immediately just because you’d be fearing imminent death.

Then I heard about “The Picnic Game,” which incorporates the alphabet — something that supplements what Marlo’s already learning at school. One player says, “I went to a picnic Saturday and I brought…” and then says something that begins with the letter A, like an artichoke. The next player repeats the opening phrase, and after “…I brought” they repeat the A item then add one that begins with B: “I brought an artichoke and some biscuits.” The third player repeats the opener, the A and the B items, and then adds something that begins with C, and so forth. You could consider encouraging your kids to come up with healthy foods to make the game even more instructional, although given Leta’s limited palate I could see her arguing that “frozen burrito” is a perfectly good fit for the letter F.

Then it was my mother’s turn: “I’m going to a picnic and I’m going to bring asparagus and beets and cabbage!!!” Yes. With three exclamation points. The Avon World Sales Leader does not do anything in life without that specific punctuation. You cannot possibly be surprised.

Next up, my stepfather: “I’m going to a picnic and I’m going to bring asparagus and beets and cabbage… and…hmm… let’s see….” Then he started counting out the alphabet on his right hand. Could that be any more adorable.

We told Marlo it was her turn, but she preferred to watch the whole spectacle unfold. I didn’t want to push it and thought it might be good for her to see how it’s played before she’s put on the spot. So I took my turn again, and told everyone that I was bringing eggs. But before I had even taken my turn, Leta figured out that she’d be getting the letter F. As soon as I finished, she fired off the quickest sentence of her life.

I told her l might skip over that part of the meal, and then my stepfather announced very matter-of-factly, “I don’t want to go on this picnic.”

Marlo was cackling at this point.

After my mother added green beans to the list, my stepfather continued to be the most adorable human on the planet: “I’m going on a picnic and I’m going to take asparagus, beets, cabbage, donuts… uhhhhh… frog legs—”

“Nuh-uh, you missed one,” my mother interrupted.

“I SAID GREEN BEANS JUST THIS SECOND!!!” my mother reminded him.

“I don’t know! I’m not paying attention! What comes after G?”

Before we got out of the car, I made a very important announcement: “Just so we are all clear, if anyone picks up that violin at any point I will force them to eat my frogs legs.”

If only you could hear how my stepfather outright refused to pronounce quinoa correctly, because no way on earth do those letters spell a word that sounds like anything other than, “KEE-OH-NAH.” Now, when the girls and I play “The Picnic Game” on those 10- to 20-minute “longest car rides ever,” whoever gets Q assumes a very low voice and shouts, “KEE-OH-NAH!”