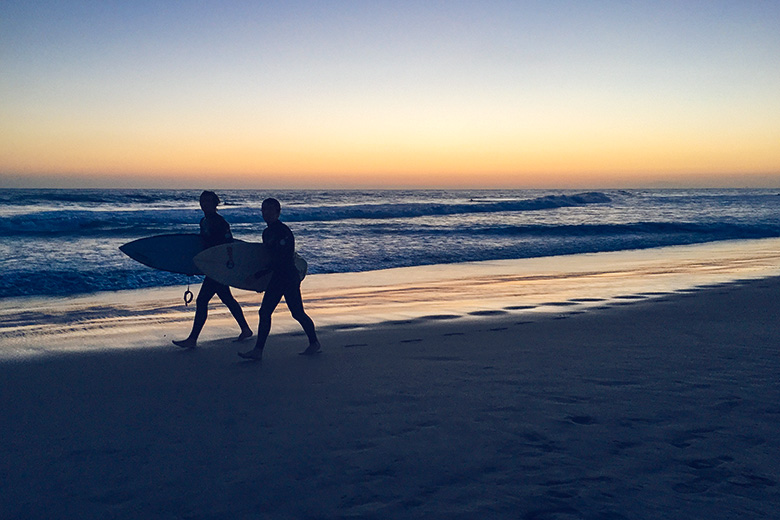 This post is brought to you in partnership with HomeAway.

Seven years ago this summer I spent over a week attempting to get my then four-year-old older daughter to walk on sand at one of the most gorgeous beaches in the country. We were on vacation. At a beach. Where there is sand. Serene, dove-white sand that told Leta’s brain that she was walking across lightning bolts. She had never been officially diagnosed as having any sort of sensory input disorder (even though I had her tested again and again, had worked with physical and occupational therapists since her birth), so I chalked this up to the same reason she didn’t like shirts with tags or food that possessed any texture or color: she’s got the Granny Hamilton in her.

Have I told you about the time Granny Hamilton broke a plate over my dad’s head? He was five. Good times.

Last week that child ran out into the Pacific Ocean and rode waves on a boogie board. And the only reason she stopped after two hours is because she has zero fat on her body and almost froze to death.

For the girls’ spring break I decided to take them to Southern California to hang out with friends, see the beach, and possibly visit a certain theme park. Yes, that one. Listen, I know. Just hold on one second. Somehow the world ended and no one took the time to tell you about it. Fine. I’ll be the one to break it to you: DOOCE WENT TO DISNEYLAND. AND SHE LIKED IT.

In the fall I had taken Marlo to Southern California to spend a few days with my good friend Kristen and her kids. Kristen’s seven-year-old son kindly gave up his bed for Marlo and me to share, but I didn’t want to impose on her family this trip, especially since there’d be one more of us. And that one more? That one is not lacking in limbs:

I bet this factored into Kristen’s decision to buy a bigger house. What if she is ever faced with hosting me and both girls? They’ll need at least two more rooms to hold all the arms alone.

So I contacted the very friendly folks over at HomeAway who have been looking for a way to collaborate. I’ve used their service twice before and loved the experience, so partnering with them was a no-brainer. I asked if they represented any properties in Newport Beach close to the ocean. Kristen lives about fifteen minutes away, and that’d put us close enough to each other so that the kids could get in huge chunks of time together. Luckily we found an airy three-bedroom six houses down from the beach equipped with bunk beds, a huge storage room full of beach equipment, and enough counter space in the kitchen to store all the goldfish crackers and white bread we’d need for the week.

It is also filled with light, newly remodeled like the most gorgeous Pinterest board has come alive, and has a huge king-sized bed in the main bedroom. That won major points with me because I knew that even though the bunk beds would be a novelty to both girls they’d eventually end up with me and I’d be dodging four sets of elbows and knees at night. With a king-sized bed you can toss them several hundred feet and they’ll still land safely on the mattress.

On Sunday we had all of the Howertons over for a beach date and a sunset barbecue. This house had a balcony patio and grill, and I loved shopping for food for the five days we were there so that we didn’t have to eat out for every meal. Also, not only were there enough boogie boards for all the big kids, there was a huge umbrella for me where I could watch them play in the sun from afar safe in the shade. Dressed in pants and a long-sleeved shirt. Wrapped in a snuggie. With a hood.

Both of my kids played for so long and so hard that they actually stayed in their own beds that night, and even when I crawled up beside them the next morning and shout-whispered, “Disneyland!” neither one of them moved. I was like:

So I stood up, cupped my hands around my mouth and yelled, “WHO HERE WANTS TO GO TO DISNEYLAND?!”

Leta’s eyes popped open and she sat straight up and raised her hand. That’s what I thought.

Marlo rubbed the sleep out of her eyes, found my face and slowly focused in to ask, “Do we have to drive for a long time to get there?” This question pretty much sums up why I have been so reluctant and intimidated by the prospect of going to any theme park. There are lines and waiting and heat and more waiting and then more waiting. As adults we have lived enough life to understand that waiting in line for a fun ride is pretty low on the level of devastating circumstances. But kids? Waiting for ANYTHING is worse than dying in a shark attack.

Much to my surprise, however, something marvelous occurred. Marlo, having never been to a theme park, had no idea how any of it worked. So when we had to wait in line, she was like, oh. Okay. This is how it goes! WE WAIT!

When we’d get to the front of the line she would lose her mind with anticipation. The sound of her chuckling on her favorite ride in the Bug’s Life area of California Adventure will not ever stop echoing in my brain. I have a special quadrant I’ve saved for that sound, that unbridled delight, pure and guileless, the most genuine sound outside of the first note that came out of her mouth when she was born. Her whole body rejoiced in that laugh, again and again. A commenter on one of my Instagram photos nailed exactly what was happening to me, how I immediately shook my head at all those years of reluctance about doing this: “We see stuff when we are ready, and it’s usually through our kids.”

Boom. She just summed up everything I’ve ever written here for my girls.

Sure, the girls did their fair share of complaining, but at Disneyland you don’t have to walk two feet before you bump into another distraction. Like giant real-life princesses:

Bug Life rides? Yes, please. Pictures with a princess? Um, NO. When I asked her why she didn’t want her photo taken with any of the princesses she said, “Princesses are cartoons, and those princesses are actual humans. They are not real.” My five-year-old, the anthropologist.

Oh, did I ever tell you guys that when I was a kid and they had the class sing along to “It’s a Small World” that I refused because I thought it was making fun of God? Yeah. It was belittling him because it was saying that the world he had created was “small.” I was fun to be around.

Those five days contain inside them some of the best memories I’ve created with my daughters. I had told myself that I was not going to adhere to any schedule. I forgot about bedtimes, didn’t care if they wore the same shirt they’d worn the day before, bought them churros for lunch. When I cleaned up the sand they carried in from the beach I laughed because it was enough to fill four mason jars. I just let go (NO FROZEN REFERENCE DO NOT EVEN THINK ABOUT IT) and by doing so everything fell into place. I am so lucky to have these two daughters, one growing very rapidly and fearlessly into her inherited arms and legs, the other reminding me to embrace the whimsical kid inside my own aging limbs.

Thank you HomeAway for being so amazing to work with and helping us find boogie boards!