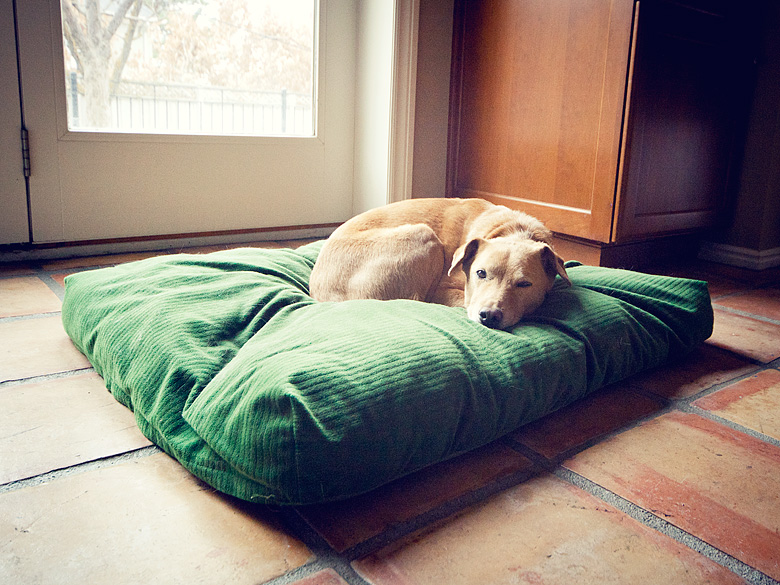 During the move as my sister and sister-in-law cleaned floors and dusted baseboards (again, a huge thank you to my family for their support) we all discovered that Chuck had been routinely marking walls and doors. Marking. As in lifting his leg to pee. Inside the house. Are you having buyer’s remorse over that puppy you just adopted? You might want to pay attention to that gut feeling. That gut feeling is otherwise known as Truth.

Before I continue and before you skip the rest of the post to suggest that something is wrong with his health, let me mention a couple of things. Chuck goes on a walk for at least thirty minutes every day. He’s also been to the vet several times in the last year for routine check-ups. They did blood work. They examined stool samples. He’s as healthy as a dog can be. The only diagnosis they could give me is that he’s an asshole. A very healthy asshole.

Okay. So. One, he’s been peeing inside the house when no one is looking. It’s not incontinence. The vet ruled that out. He was walking around the house, most likely when everyone was asleep, and going, “You know what? I’m going to pee on this here wall. Oh. And that one, too. Look. There’s a door. I will give it my pee. Who else wants my pee? I’ve got pee.”

I almost said chrono-co-logical because it sounds like something Pitbull would just throw into a song, and all of us who are being forced to listen to it are like, why do you think that’s okay? That’s not okay. No one thinks that’s okay. Stop talking, Pitbull.

No, I didn’t get any sleep this weekend. How can you tell?

TWO: during the day when I was working in my office he would go into my bedroom, hop onto my bed and burrow. Over the course of one week he destroyed two sets of sheets, my duvet and its cover, and three pillowcases. He shredded them into multiple pieces. Like some sort of canine Edward Scissorhands. That’s what I’m going to call him from now on: Ed. Eddie. Yo, Edwardo, cut it out.

Add to that pile of ruin every couch and chair in the house. He pretty much scratched holes into every padded seat he could find. I just… Eddie, why can’t you be one of those normal deranged dogs and dig holes in the yard? Why couches? Why chairs? Answer me. Do not look at me like you do not speak English.

Three. We finally made it all the way to three. And three is perhaps the most disturbing bullet point because it disproves that old saying that you can’t teach an old dog new tricks. Because three? Three is this: Coco taught Chuck how to eat poop.

The Former Congressman Henry Buck Chucklesworth is a poop eater. This is so much worse than finding out he’s been sending dick pics to his interns.

This move helped me understand the huge scope of the problem, so I went back to some notes I took down when he was trained at four months old. The first thing I did was go out a buy a crate.

Three, two, one… AND BEHOLD THE RISING OF THE ANTI-CRATE PEOPLE.

I know, you think putting a dog in a crate is barbaric. It’s a cage. It’s confining. It’s worse than writing about holding my daughter’s poop in my hands. Stomp your feet and yell obscenities at me and UNFOLLOW. You, Anti-Crate Person, are entitled to that opinion. I hope you and your perfectly behaved canine live prosperous lives and end up retiring on a tropical beach. In the name of Jesus Christ, amen.

Now shut up for a minute.

The first day the dogs and I were in the new house, I did everything the experts tell you to do when it comes to introducing dogs to a new environment. Despite this, Chuck slipped into the basement where I have set up my office. And he gave his pee to the fireplace in that room. A bucket of pee. Just raised his leg and pissed his name all over that thing. A gift. Of pee.

I had shut the door to my bedroom so that he could not climb onto my bed with its brand new bedding and scratch the hell out of it. But I did not realize that the doorknob to that room was broken and would not stay shut. So after gifting his pee to the fireplace in the basement he went to my room, nudged open the door, climbed onto my bed and scratched the hell out of my brand new bedding. Ed-fucking-wardo.

HERE IS THE ACTION THAT I TOOK PLEASE JUDGE HARSHLY:

That night I set up Coco’s crate next to Chuck’s crate in a very open storage room. I ushered them in and then draped a sheet over both cages crates. They have slept there every night since. When I am not at home I put them back in their crates before I leave. Gone are the days when I would leave them to roam the house alone. When I am at home, Chuck is either on a leash by my side or lounging on a dog bed where I can see him.

The marking has totally stopped. The burrowing on furniture has ended. A strange, unexpected peace has developed in Chuck’s demeanor. Where once I would find him staring anxiously at a wall he is now napping tranquilly at my feet. I mentioned last week that these boundaries have brought a much needed sense of order to his life, and I’m sorry I was too busy and disoriented myself to implement them earlier.

As for the poop eating? Nothing deterred Coco and nothing deters Chuck. If you google “how do I get my dog to stop eating poop” there will be pages of suggestions that I have tried. None of them work. The solution: I have to make sure there is no poop to eat, so a daily sweep of the backyard got inserted into my to-do list. It’s the bullet point right after the one that says, “Lean down next to Chuck, nuzzle his head, and assure him that we’ll get through this together.”