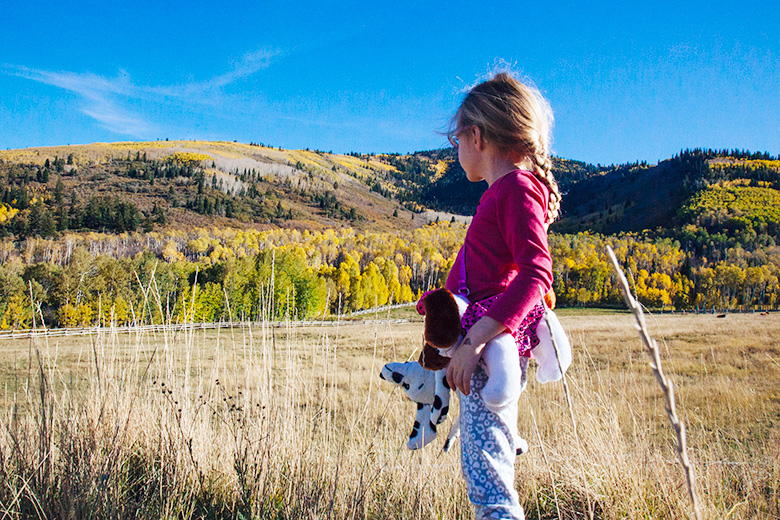 A couple of Sundays ago the girls and I didn’t have anything planned for the afternoon—no play dates, no plans to visit family, no strategies to take over the world. To try and remedy this sad state of affairs I did a quick search online for fun places to go. Unfortunately, everything was closed. That’s when I remembered, “Oh, right. We live in Utah.” I have that thought often, especially when I’m at a party and green Jell-O is offered as a side to the meal. It would be less horrifying if grated carrots were not floating around in that green Jell-O, but now I’m just being picky.

Because the dominant religion in Utah recognizes the importance of rest on the Sabbath, almost everything is closed on Sundays. My kids were getting restless that afternoon when I remembered that Dane’s mother Jenny works with horses up in Park City. Since the colors along the mountainside are changing, I had Tyrant put in a call to see if I could take the girls up there for a quick visit to see the animals and transforming scenery. Tyrant, someone who would gladly accept the offer if you called him at 2AM and asked if he’d like to meet for coffee on the rooftop of the Capitol Building while wearing nothing but a towel, not only called Jenny but offered to drive.

I am always up for having an extra set of hands around, even if those hands are routinely scheming to scare me and/or pull a prank that leaves me scarred for life (SEE: CONVINCING ME THAT I HAD EATEN MY DEAD PET FISH).

We soon loaded up in the car and headed up the canyon. Marlo immediately asked to watch a movie because HOW LONG IS THIS GOING TO TAKE?

FOREVER. We will be in the car forever. For infinity. The end.

That’s when I decided that this would be a great opportunity to try another game to keep my kids occupied for the duration of the 40-minute car ride. Could they do it? Could they handle that much time in the car without a video game or movie? Perhaps I should have told them about the drive my family took from Tennessee to Wyoming, about the endless bickering between my brother and I and how my father then made us sit in silence with our hands on our heads for the entire state of Kansas.

GUESS WHAT, KIDS? WE ARE GOING TO PLAY A GAME.

“Where are we going?” I asked everyone in the car.

Marlo and Leta both shouted in unison, “PARK CITY!”

“Mom, what are you doing?” Leta asked. “You know we are the Armstrongs. Well, John LaCaze isn’t. He’s a LaCaze.”

“I’m trying to demonstrate a game we’re going to play,” I explained. “Just go along with this for a second. What are we going to do when we get there?”

Marlo raised her hand and yelled, “PET HORSES! WE ARE GOING TO PET HORSES!”

“Yes, we’re going to pet horses. Where are we coming from?”

Again in unison the girls answered, “Salt Lake City.” I love that they say, “Salt Lake City,” when most adults here refer to is as “Salt Lake.” My girls always include “City” when they talk about where they live. One of my favorite instances of this happened while we were driving home from a play date. After passing a sprawling cemetery dotted with giant looming tombstones, Marlo announced from the backseat, “There sure are a lot of dead people in Salt Lake City.”

I then asked Leta to choose a car, describe the person driving it, and then explain where he was coming from and planning to go.

“Okay,” she said while nodding her head. She then pointed to a gray four-door sedan next to us. “That’s Pete.”

Tyrant couldn’t help himself and rolled down the window to scream, “WOO! WOO! HI, PETE! WOO!”

I turned slowly toward him while blinking very purposefully. “Please tell me you are not going to do this the entire time we are in the car.”

Leta continued, “LISTEN! His name is Peter and he’s from Logan. Let’s see… he fixes tires for cars. And he does that because when he was a kid he loved to wash the car and stuff. So… he’s driving to Las Vegas.”

“Yes!” she answered. “He’s going to Las Vegas because he wants to hit a jackpot and get a lot of money.”

The LaCaze in the car interrupted to say, “Roll down your window and ask him if he has room in his car. I love Vegas! WOO! WOO!”

“Wait,” I said and turned around to face her. “Having all that money is what is going to make him find a wife?”

“That’s what he thinks,” she answered.

“Do you think that all that money is going to make him find a wife?”

“Yeah, it is sad. He should just head back to Logan, fix more tires and save his money.”

BEHOLD THE WISDOM OF MY FIRSTBORN CHILD. I’m taking all the credit here.

Next, we asked Marlo to pick a car. She pointed to a brown SUV and began her tale.

“That woman is a fairy,” she began. “And she’s going to a frozen castle where she freezes things and when she turns around with her hand the whole thing turns to frozen things and she can freeze you so you better be careful.”

I wonder where she came up with that.

“My turn,” Tyrant insisted. “I’m very picky about my cars.”

I glanced at him and mumbled under my breath, “There is so much I want to say right now, but there are children in this vehicle.”

“Okay! See that truck?” he continued. “It’s sitting there in line for that drive-thru coffee shop. His wife is having a coffee attack. She really needs her coffee. So they had to pull over on the side of the road. This is in the middle of their camping trip.”

“Stop and listen. They were camping in the hills and they had to come back early because the wife needed her caffeine. So she’s getting her coffee and then they’re going to head back up into the hills because they want to camp for one more day.”

“Why would he willingly get back into the car and go back into the hills knowing that she had a coffee attack?” I asked. “That is either a very brave or a very stupid man.”

“He bought all the coffee they had at that shop,” he explained. “Every last bit of it. They have plenty now. Oh! These two people are from India. They came here on vacation because they’ve seen nothing like this. They don’t have anything like this in India, all these beautiful mountains, the terrain and all that.”

I laughed out loud.

“Do you know anything about India?” I asked

“Makes sense,” I said. “You have to prioritize. Nobody wants to get wounded in a coffee attack.”

It was finally my turn, and suddenly I got a little nervous.

“You know, I should be good at this, but I don’t write fiction. Hmm… this is really hard for me. Hmm…ughhhhhhhh…HERE WE GO! There is a four-dour station wagon. And there is a man and a woman inside… okay… they are from… a little town down south called Panguitch.”

“Is that next to Sandwich?” asked Tyrant.

“Yes,” I confirmed. “It’s next to Sandwich and Manwich. So, they’re high school sweethearts, and they both grew up on farms. And she came up with an invention that makes it really easy… to… to milk cows. You stick a cow inside a chamber, and some sort of magic occurs where the milk is beamed out of the cow and into a bucket. There’s no mess and no clean up!”

“This is the strangest story,” Leta said, rolling her eyes as she gazed out the window.

“I’m not done!” I shouted in defense. “She came up with this idea and made a ton of money, but she’s really smart about it. See? They aren’t driving a fancy car! They’re just driving a regular car! They decided to save their money and put enough away so that their kids could go to college. They paid off their house, and then they started a non-profit that helps farmers pay for equipment and insurance and vet bills.”

“Boooor-iiiiing,” my wise firstborn sang from the backseat.

“I AM NOT DONE!” I insisted. “They are headed up to a dinner at a fancy house in Park City that’s being hosted by another philanthropist, and the President is going to be there. The President is in town just for this.”

“Yes! Obama! See? I’m not so bad at this. They are going to try to get the president to pass some legislation that will… hmm… what kind of legislation… they want the President to help more cows.”

Leta then asked the question on everyone’s mind, “Do cows need help?”

After Leta told three more intricate stories we finally arrived at the stables. As Tyrant parked the car I turned around to both girls and said, “Both of you just spent 40 minutes in a car and not once did you look at a screen. You both survived. Can you even believe it?”

Neither of them was paying attention to a word I was saying because HORSES.