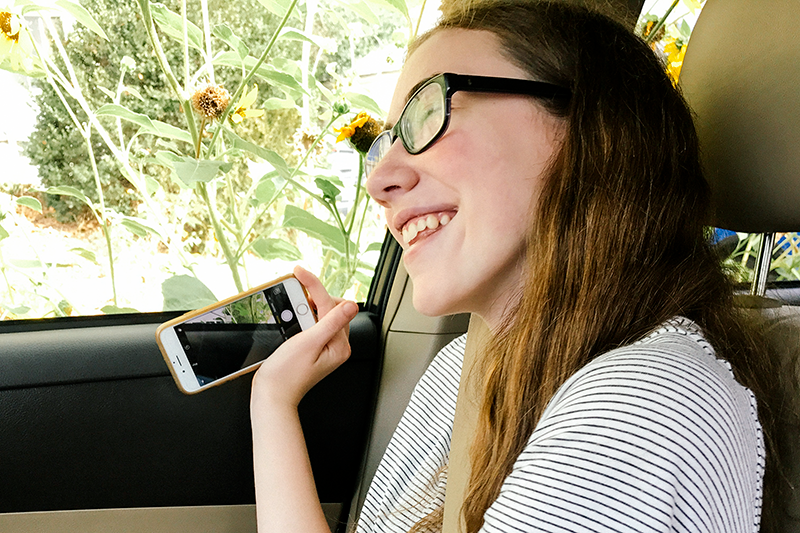 I am about to attempt a blog post on a mommy blog about a middle school-aged kid without embarrassing that middle school-aged kid, so here is where you need to remind me to stop before I get to the part about the hemorrhoid cream. Wait. It just happened! You didn’t stop me! You just up and let me do it. Great work, team. We are the type of people who just watch our eight-year-olds reach into the drawer for their toothbrush and toothpaste and let them absentmindedly mistake the Preparation H for the Colegate Advanced Whitening gel without stopping them. I love us.

Saturday morning Leta woke up and immediately started asking me when “we” were going to go to an annual street fair and by “we” she meant “me driving her there and dropping her off.” I had explained the night before that Marlo had some early-afternoon plans and “we” wouldn’t be going until later in the day, and so instead of making an outright request she kept hinting at this other arrangement without using the specific language because doing so might cause a conflict. As in “mom says no” or “the end of the world” or “we all die alone.”

After the 600th attempt I said, “Dude. You are my kid. Do you think your ability to disguise potentially fraught requests with vague language just *POOF* came out of nowhere? Like magic? You want me to drive you to the street fair and drop you off. Give me a half hour.”

She gave me the LetaArmstrongBlink®—yes it is registered trademark, and even though I’m sure your teenager has their variation of it it’s the dynamic between the two of us that makes hers so unique. Later that day she would say to me that sometimes she is sitting around with her friends complaining that parents just don’t get it, just don’t get what it’s like to be that age and suffer what they suffer (one sec: hemorrhoid cream, jerk off motion, every animated GIF of Britney Spears chewing gum and making a face like she just heard someone else say that they survived 2007 better than she did), and then she realizes, wait. My mom went through all of this. She lived this whole thing. Of course she gets it! In fact, she had it way worse because as a Mormon kid she felt guilty and repented to god when she’d walk into a grocery store and think that the coffee aisle smelled really, really good.

The LetaArmstrongBlink® is this mixture of “how did I forget again that my mother was a horribly awkward teen” and “oh, yeah, it’s my dad who forces me to try food I don’t like”. That’s not at dig at him. We just approach this thing differently sometimes and that’s fine. When we go to a restaurant for breakfast and their menu is engineered specifically to give you heart disease, my kids get to eat whatever the hell they want to eat. I will not suggest that they add a protein source to accompany their whipped-cream topped chocolate pancakes because why did we go there in the first place other than to die very happy, clogged-artery deaths.

Did I leave Marlo at home alone to drive Leta to this street fair? No, I did not. The professional installing my brand new shower head was there to make sure Marlo didn’t set the house on fire. He seemed capable of operating a fire extinguisher. Maybe.

So we got there, Leta and I, and just as I pulled up to the edge of the fair I realized that she was uneasy. She wasn’t going to get out of the car. And I pushed my frustration and the idea of the house burning down to the bottom of my stomach, looked across the car and asked, “Why are you not getting out of this car that I drove here specifically because you asked me to. Pardon me if I sound frustrated, it is because I need to burp and can’t hold it in. Also, get out.”

“But what if I can’t find my friends?” she explained.

“It’s not like you’re looking for Waldo at the Super Bowl, Leta. And you’ve got your phone. You’ll find them, I promise.”

I guess this is probably why my friend Ivy often says to her kids to get them in line, “If you were over at Heather’s house, you think she’d let you get away with this?”

NOPE. NO I WOULD NOT.

Because I shook my head and said, “But nothing. You asked me how many times to bring you here? I have brought you here. Marlo is back at the house and could right this second be discovering her pyromania. I love you, but you need to get out of the car.”

She scowled at me, and then blurted an insensitive, “I’m sorry,” while rolling her eyes. If I had ever done that to my father he would have shown me what life looks like when you’re dead. But she’s 13 years old, and from time to time I let her get away with being 13 years old. This was one of those times.

She got out of the car, and after I watched her walk over to the edge of the street fair I drove home and was relieved to find only two fire trucks in front of my house. And then throughout the rest of the day I kept getting text messages from my friends saying that they had just run into Leta. And they couldn’t believe how tall she had grown over the summer, how incredibly polite she was, how lovely she was to talk to. My friends were gushing about how good my kid is, and I was like, well, duh. She’s the best kid who ever lived. You want to know why? When we met up with her later that afternoon she immediately hugged me—right there in the middle of all those people where anyone could see us—and said, “I am so sorry about earlier. I shouldn’t have left the car like that. Do you forgive me?”

I told her, of course I did. We all have our moments. We all get frustrated. And that’s when she told me about those conversations she has with her friends about how parents don’t get it. And she was happy that I get it. And oh, do I get it, Leta. Just like I knew my own mom got it, and when I came to her at 17 years old and told her how bad I felt for having kissed a boy for the first time the night before, she didn’t outright laugh at me even though she really, really wanted to. Would she ever forgive me, I remember asking her.

Of course she would.